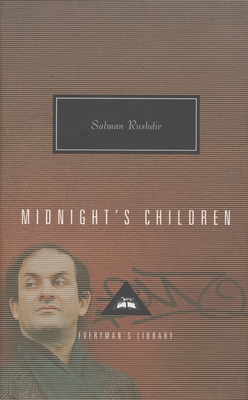 By Salman Rushdie, Anita Desai (Introduction by)
Hard to Find - May not be reprinted

A classic novel, in which the man who calls himself the "bomb of Bombay" chronicles the story of a child and a nation that both came into existence in 1947—and examines a whole people's capacity for carrying inherited myths and inventing new ones.

Salman Rushdie was born in 1947 and has lived in England since 1961. He is the author of six novels: Grimus, Midnight’s Children, which won the Booker Prize in 1981 and the James Tait Black Prize, Shame, winner of the French Prix du Meilleur Livre Etranger, The Satanic Verses, which won the Whitbread Prize for Best Novel, Haroun and the Sea of Stories, which won the Writers’ Guild Award and The Moor’s Last Sigh which won the Whitbread Novel of the Year Award. He has also published a collection of short stories East, West, a book of reportage The Jaguar Smile, a volume of essays Imaginary Homelands and a work of film criticism The Wizard of Oz. His most recent novel is The Ground Beneath Her Feet, which was published in 1999. Salman Rushdie was awarded Germany’s Author of the Year Award for his novel The Satanic Verses in 1989. In 1993, Midnight’s Children was voted the ‘Booker of Bookers’, the best novel to have won the Booker Prize in its first 25 years. In the same year, he was awarded the Austrian State Prize for European Literature. He is also Honorary Professor in the Humanities at the Massachusetts Institute of Technology and a Fellow of the Royal Society of Literature. His books have been published in more than two dozen languages.

FROM THE NEW INTRODUCTION BY Anita Desai:
“Rushdie's writing resembles a horse at full gallop that will not halt and wait. He creates an epic by turning his characters into symbols and archetypes so that their histories are lived out at several levels at one time-real and fantastic, metaphorical and symbolic . . . He is a writer of an epic-secular, irreligious, irreverent, subversive, both comic and profoundly serious . . . in short, an epic of our times.”

“Huge, vital, engrossing . . . in all senses a fantastic book.”
-THE SUNDAY TIMES LONDON

“In Salman Rushdie . . . India has produced a glittering novelist-one with startling imaginative and intellectual resources, a master of perpetual storytelling. Like García Márquez . . . he weaves a whole people's capacity for carrying its inherited myths-and new ones that it goes on generating-into a kind of magic carpet . . . Saleem Sinai . . . is dramatizing his past life as a prophecy, even universalizing his history as a mingling of farce and horror and matching it with thirty years of the Indian crowd's collective political history . . . As a tour de force his fantasy is irresistible.”
-V.S. Pritchett, THE NEW YORKER

“One of the most important books to come out of the English-speaking world in this generation.”
-THE NEW YORK REVIEW OF BOOKS