A Good Provider Is One Who Leaves: One Family and Migration in the 21st Century (Hardcover) 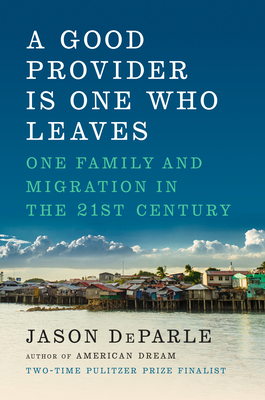 One of The Washington Post's 10 Best Books of the Year

"This is epic reporting, nonfiction on a whole other level...One of the best books on immigration written in a generation."--Matthew Desmond, author of Evicted

The definitive chronicle of our new age of global migration, told through the multi-generational saga of a Filipino family, by a veteran New York Times reporter and two-time Pulitzer Prize finalist.

When Jason DeParle moved into the Manila slums with Tita Comodas and her family three decades ago, he never imagined his reporting on them would span three generations and turn into the defining chronicle of a new age--the age of global migration. In a monumental book that gives new meaning to "immersion journalism," DeParle paints an intimate portrait of an unforgettable family as they endure years of sacrifice and separation, willing themselves out of shantytown poverty into a new global middle class. At the heart of the story is Tita's daughter, Rosalie. Beating the odds, she struggles through nursing school and works her way across the Middle East until a Texas hospital fulfills her dreams with a job offer in the States.

Migration is changing the world--reordering politics, economics, and cultures across the globe. With nearly 45 million immigrants in the United States, few issues are as polarizing. But if the politics of immigration is broken, immigration itself--tens of millions of people gathered from every corner of the globe--remains an underappreciated American success. Expertly combining the personal and panoramic, DeParle presents a family saga and a global phenomenon. Restarting her life in Galveston, Rosalie brings her reluctant husband and three young children with whom she has rarely lived. They must learn to become a family, even as they learn a new country. Ordinary and extraordinary at once, their journey is a twenty-first-century classic, rendered in gripping detail.

Jason DeParle, an Emerson Fellow at New America, is a reporter for The New York Times and has written extensively about poverty and immigration. His book American Dream: Three Women, Ten Kids, and a Nation's Drive to End Welfare was a New York Times Notable Book and won the Helen Bernstein Award from the New York Public Library. He is a recipient of the George Polk Award and is a two-time finalist for the Pulitzer Prize.

"This is the best book on immigration I've read. Three decades ago, Jason DeParle moved into the Manila slums with the family. He chronicles their immigration story but through it tells the larger tale of what it all means. His empathy, intelligence and good writing shine through every page."
—Fareed Zakaria

"A sweeping, deeply reported tale of international migration that hopscotches from the Philippines through the Middle East, Europe and eventually the United States . . . DeParle’s understanding of migration is refreshingly cleareyed and nuanced."
—The New York Times

"[A] riveting multigenerational tale of one Filipino family dispersing across the globe, from Manila to Abu Dhabi to Galveston, Tex., and so many places in between...DeParle’s examination of how the two daughters adapt to U.S. elementary schools, seeking to become more all-American than the Americans, even as their parents find solace in Texas’s Filipino immigrant networks, is a minor classic of the assimilation experience....The book is packed with insights."
—The Washington Post

“This is epic reporting, nonfiction on a whole other level. One of the nation’s most committed immersive journalists, Jason DeParle spent thirty years with a single family whose lives were defined by immigration, traveling to several countries and seeing children grow up and have children of their own. No matter your politics or home country, A Good Provider Is One Who Leaves will change how you think about the movement of people between poor and rich countries. Intimate narratives entwine with sweeping, global accounts to produce one of the best books on immigration written in a generation.”
—Matthew Desmond, author of Evicted

“An intelligent, compassionate analysis of the economic, political, and cultural ramifications of global migration.”
—The Christian Science Monitor

"A remarkable book . . . DeParle offers us a brisk history of immigration and immigration policy and wise reflections on contemporary migration."
—The Boston Globe

“This years-in-the-making, panoramic story follows the Portagana family from the slums of Manila across four continents. A humane epic of real people in search of better lives.”
—The Philadelphia Inquirer

"Remarkable...[A Good Provider Is One Who Leaves] will leave you better understanding how the world works today and where we’re likely headed."
—Washington Monthly

"DeParle humanizes the politics of migration and the powerful forces of assimilation...immigration may be a hot button issue today, but in his profoundly wise, insightful, and eloquent book, DeParle goes behind sloganeering and conveys the vast and tangled obstacle course navigated by those who dream of lifting their families out of poverty."
—The National Book Review

"[An] ambitious and successful book . . . DeParle has a frank, amiable and plain-spoken virtuosity as a writer."
—Minneapolis Star Tribune

"An admirably sober and sympathetic treatment of a topic that right now evokes the worst impulses in many Americans…. What makes DeParle’s book stand out is its focus on women immigrants….he has leveraged his unusually close-up access to trace a fascinating narrative of female empowerment against the merciless machine of globalization."
—Texas Monthly

“A remarkably intimate look at migration’s impact on both a single family and the global community.”
—Booklist (starred review)

“Jason DeParle has captured the power and peril of immigration—through the story of one family, scattered across the planet, working in hospitals, cruise ships and hotel bathrooms near you. A Good Provider Is One Who Leaves is an exceptional accomplishment: sweeping, vivid and complicated in all the right ways. Just when we are about to lose hope, there is a moment of beauty or humor or grace that saves us from despair.”
—Amanda Ripley, author of The Smartest Kids in the World

“A Good Provider Is One Who Leaves sets a new standard in the literature of migration—heart-melting in the intimacy of the Portagana family story across generations and continents and at the same time profound in its connection of that story to the broader phenomenon. Eloquence on every page.”
—Tom Gjelten, NPR Correspondent and author of A Nation of Nations

"It's hard to imagine a book better timed; after decades of work, Jason DeParle delivers this masterpiece of reporting and insight at precisely the moment when America is making the most basic decisions about immigration. His story-telling is so vivid, granular and alive that, once you've read it, immigration can never be a bumper-sticker controversy again. An American classic."
—Bill McKibben, author of Falter: Has the Human Game Begun to Play Itself Out?