The High Mountains of Portugal (Prebound) 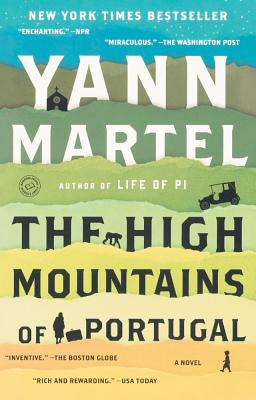 By Yann Martel
Out of Print

"NEW YORK TIMES "BESTSELLER Fifteen years after "The Life of Pi, " Yann Martel is taking us on another long journey. Fans of his Man Booker Prize winning novel will recognize familiar themes from that seafaring phenomenon, but the itinerary in this imaginative new book is entirely fresh. . . . Martel's writing has never been more charming. Ron Charles, "The Washington Post
"
In Lisbon in 1904, a young man named Tomas discovers an old journal. It hints at the existence of an extraordinary artifact that if he can find it would redefine history. Traveling in one of Europe's earliest automobiles, he sets out in search of this strange treasure.
Thirty-five years later, a Portuguese pathologist devoted to the murder mysteries of Agatha Christie finds himself at the center of a mystery of his own and drawn into the consequences of Tomas's quest.
Fifty years on, a Canadian senator takes refuge in his ancestral village in northern Portugal, grieving the loss of his beloved wife. But he arrives with an unusual companion: a chimpanzee. And there the century-old quest will come to an unexpected conclusion.
"The High Mountains of Portugal" part quest, part ghost story, part contemporary fable offers a haunting exploration of great love and great loss. Filled with tenderness, humor, and endless surprise, it takes the reader on a road trip through Portugal in the last century and through the human soul.
Praise for "The High Mountains of Portugal"
Just as ambitious, just as clever, just as existential and spiritual as "Life of Pi"] . . . a book that rewards your attention . . . an excellent book club choice. "San Francisco Chronicle"
There's no denying the simple pleasures to be had in "The High Mountains of Portugal." "Chicago Tribune"
Charming . . . Most Martellian is the boundless capacity for parable. . . . Martel knows his strengths: passages about the chimpanzee and his owner brim irresistibly with affection and attentiveness. "The New Yorker"
A rich and rewarding experience . . . Martel] spins his magic thread of hope and despair, comedy and pathos. "USA Today
"
I took away indelible images from "High Mountains, "enchanting and disturbing at the same time. . . . As whimsical as Martel's magic realism can be, grief informs every step of the book's three journeys. In the course of the novel we burrow ever further into the heart of an ape, pure and threatening at once, our precursor, ourselves. NPR
Refreshing, surprising and filled with sparkling moments of humor and insight. "The Dallas Morning News"
We re fortunate to have brilliant writers using their fiction to meditate on a paradox we need urgently to consider the unbridgeable gap and the unbreakable bond between human and animal, our impossible self-alienation from our world. . . . Martel s] semi-surreal, semi-absurdist mode is well suited to exploring the paradox. The moral and spiritual implications of his tale have, in the end, a quality of haunting tenderness. Ursula K. Le Guin, "The Guardian"
Martel packs] his inventive novel with beguiling ideas. What connects an inept curator to a haunted pathologist to a smitten politician across more than seventy-five years is the author's ability to conjure up something uncanny at the end. "The Boston Globe"
A fine home, and story, in which to find oneself. Minneapolis "Star Tribune"

"From the Hardcover edition.

Yann Martel is the author of "Life of Pi, " the global bestseller that won the 2002 Man Booker Prize (among other honors) and was adapted to the screen in the Oscar-winning film by Ang Lee. He is also the author of the short story collection "The Facts Behind the Helsinki Roccamatios, " the novels "Self "and "Beatrice and Virgil, " and the nonfiction work "101 Letters to a Prime Minister." Born in Spain in 1963, Martel studied philosophy at Trent University, worked at odd jobs tree planter, dishwasher, security guard and traveled widely before turning to writing. He lives in Saskatoon, Canada, with the writer Alice Kuipers and their four children. "From the Hardcover edition.""