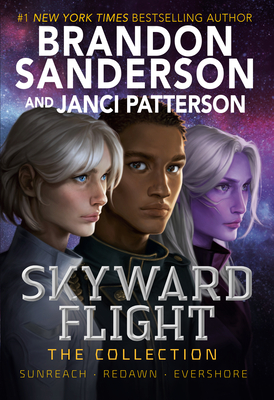 Return to the planet Detritus with FM, Alanik, and Jorgen in this must-have three-novella collection featuring exclusive character art and deleted scenes from Skyward with commentary from Brandon Sanderson.

Journey with Skyward Flight to Detritus—humanity’s final refuge from the hostile Galactic Superiority government. In Skyward, Spensa Nightshade became a starfighter pilot in the Defiant Defense Force’s Skyward Flight to battle Superiority forces. In Starsight she impersonated the alien Alanik to infiltrate a Superiority space station and steal their hyperdrives. And in Cytonic she traveled the strange dimension of the Nowhere to discover the secrets of the planet-destroying Delvers and unlock her own Cytonic powers.

As she is stuck in the Nowhere, Spensa’s companions FM and Jorgen in Skyward Flight are left on Detritus with a new mandate: figure out how to use the hyperdrives so that humanity can escape the planet and find allies among other species oppressed by the Superiority. First comes a distress call from Minister Cuna and other diones on the abandoned outpost of Sunreach. Alanik’s people on the planet ReDawn and the Kitsen from the planet Evershore also need Skyward Flight’s aid in their desperate battles.

The tales of FM, Alanik, and Jorgen combine to expand the universe of the New York Times bestselling Skyward series to new action-packed heights. Once you’ve claimed the stars, can you keep them free?

Brandon Sanderson is the author of the #1 New York Times bestselling Reckoners series: Steelheart, Firefight, and Calamity and the e-original Mitosis; the New York Times bestsellers Skyward and its sequel Starsight; the internationally bestselling Mistborn trilogy; and the Stormlight Archive. He was chosen to complete Robert Jordan's The Wheel of Time series. His books have been published in more than twenty-five languages and have sold millions of copies worldwide. Brandon lives and writes in Utah. To learn more about him and his books, visit him at brandonsanderson.com or follow @BrandSanderson on Twitter and Instagram.

Janci Patterson writes in a variety of genres, so whatever you’re looking for, she’s probably got something you’ll like.  Her first book, Chasing the Skip, was published by Henry Holt in 2012.  After publishing several contemporary YA novels and the YA paranormal A Thousand Faces trilogy, Janci discovered a love of collaboration and has written books with Megan Walker, Lauren Janes , James Goldberg, and Brandon Sanderson. Janci lives in Utah with her mini-painting husband, Drew Olds, and their two awesome kids.  She has an MA in creative writing from BYU.  When she’s not writing, Janci enjoys turn-based RPGs, miniatures board games, barbie repaints, and playing with her border collie. You can find Janci at www.jancipatterson.com.

"Hot pilots slug it out with the galactic overlords in a collection that will please series fans." —Kirkus Reviews