A Light in the Dark: A History of Movie Directors (Hardcover) 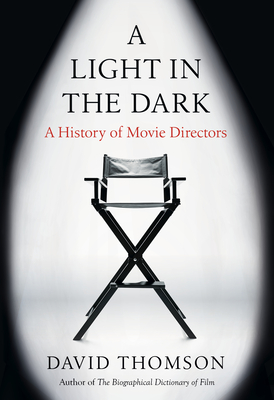 From the celebrated film critic and author of The Biographical Dictionary of Film--an essential work on the preeminent, indispensable movie directors and the ways in which their work has forged, and continues to forge, the landscape of modern film.

Directors operate behind the scenes, managing actors, establishing a cohesive creative vision, at times literally guiding our eyes with the eye of the camera. But we are often so dazzled by the visions on-screen that it is easy to forget the individual who is off-screen orchestrating the entire production--to say nothing of their having marshaled a script, a studio, and other people's money. David Thomson, in his usual brilliantly insightful way, shines a light on the visionary directors who have shaped modern cinema and, through their work, studies the very nature of film direction. With his customary candor about his own delights and disappointments, Thomson analyzes both landmark works and forgotten films from classic directors such as Orson Welles, Alfred Hitchcock, Jean Renoir, and Jean-Luc Godard, as well as contemporary powerhouses such as Jane Campion, Spike Lee, and Quentin Tarantino. He shrewdly interrogates their professional legacies and influence in the industry, while simultaneously assessing the critical impact of an artist's personal life on his or her work. He explores the male directors' dominance of the past, and describes how diversity can change the landscape. Judicious, vivid, and witty, A Light in the Dark is yet another required Thomson text for every movie lover's shelf.

DAVID THOMSON is the author of more than twenty-five books, including The Biographical Dictionary of Film, biographies of Orson Welles and David O. Selznick, and the pioneering novel Suspects, which was peopled with characters from film.

“[A Light in the Dark] is highly personal, unapologetically opinionated, intermittently whimsical, charmingly idiosyncratic and above all deeply impassioned. It reads, at times, like a love letter to the art that has moved Thomson most. Or a eulogy dedicated to a tradition, and indeed a world, he fears may be on the verge of disappearing.”—Troy Jollimore, The Washington Post

“Thomson’s own genius is his ability to remain one of the leading authorities on cinematic history, without shying away from the controversial. Cinephiles seeking provocative arguments will appreciate his work.”—Lisa Henry, Library Journal

“Compulsive reading: thoughtful and thought-provoking in equal measure. David Thomson's knowledge is comprehensive and his response to all films humane and entirely uncorrupted by the conventional hagiography of so much writing about film. He’s engagingly unafraid of challenging received opinion.”—Richard Eyre, director

“David Thomson has spent his life thinking hard and deep about cinema, and so he’s uniquely placed to write this lovely, brutal book about the glory of being a film-maker and vainglory of being an auteur.”—David Hare, screenwriter and playwright

“A Light in the Dark took over my life for two days. It is a summary of cinema and a requiem. Love and sadness. A prodigious masterwork.”—John Boorman, director

“Thomson isn't just in the pantheon of truly great living movie critics, he's the only one who has written two books that I consider requisites in any home library of serious movie lovers.”—Jeff Simon, Buffalo News

“Thomson’s writing rarely disappoints. He gives us plenty to think about and plenty more to argue about.”—David D’Arcy, The Arts Fuse