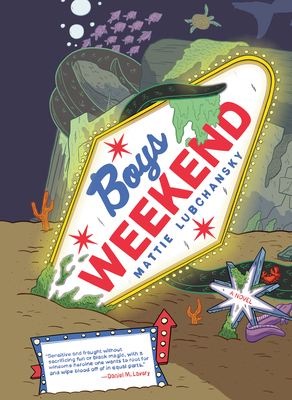 From the award-winning cartoonist and editor of The Nib, a hilarious trans-"final girl" horror graphic novel about a bachelor party gone very, very wrong.

Newly-out trans artist’s assistant Sammie is invited to an old friend’s bachelor weekend in El Campo, a hedonistic wonderland of a city floating in the Atlantic Ocean's international waters—think Las Vegas with even fewer rules. Though they have not identified as a man for over a year, Sammie’s college buddies haven't quite gotten the message—as evidenced by their formerly closest friend Adam asking them to be his “best man.”
Arriving at the swanky hotel, Sammie immediately questions their decision to come. Bad enough that they have to suffer through a torrent of passive-aggressive comments from the groom's pals—all met with zero pushpack from supposed "nice guy" Adam. But also, they seem to be the only one who's noticed the mysterious cult that's also staying at the hotel, and is ritually dismembering guests and demanding fealty to their bloodthirsty god.
Part satire, part horror, Boys Weekend explores what it’s like to exist as a transfemme person in a man’s world, the difficulty of maintaining friendships through transition, and the more cult-like effects of masculinity, “hustle” culture, and capitalism—all through the vibrant lens of a surreal, scary, and immensely imaginative romp.

MATTIE LUBCHANSKY is a cartoonist and illustrator and the Associate Editor of Ignatz award-winning magazine and website The Nib (thenib.com). They are also an Ignatz winner, a Herblock Prize finalist, and the author of The Antifa Super-Soldier Cookbook. They live in beautiful Queens, NY, with their spouse.

“Nervy, fluid, punchy, like a cup of skeletons. Sensitive and fraught without sacrificing fun or black magic, with a winsome heroine one wants to root for and wipe blood off of in equal parts. I want more!”
—Daniel M. Lavery, author of Something That Will Shock and Discredit You

“Mattie Lubchansky is one of cartooning’s best satirists and their debut novel is a confident, clever, and poignant commentary on the many-tentacled monster of gender and capitalism.”
—Matt Bors, founder of The Nib and author of Justice Warriors