Nothing More to Tell (Hardcover) 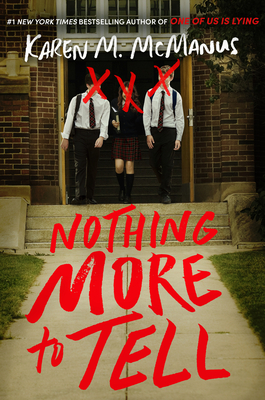 NEW YORK TIMES BESTSELLER • From the critically acclaimed author of One of Us Is Lying comes a new page-turning mystery. Be sure to keep your friends close . . . and your secrets closer.

Four years ago, Brynn left Saint Ambrose School following the shocking murder of her favorite teacher—a story that made headlines after the teacher’s body was found by three Saint Ambrose students in the woods behind their school. The case was never solved. Now that Brynn is moving home and starting her dream internship at a true-crime show, she’s determined to find out what really happened.

The kids who found Mr. Larkin are her way in, and her ex–best friend, Tripp Talbot, was one of them. Without his account of events, the other two kids might have gone down for Mr. Larkin’s murder—but instead, thanks to Tripp, they're now at the top of the Saint Ambrose social pyramid. Tripp’s friends have never forgotten what Tripp did for them that day, and neither has he. Just like he hasn’t forgotten that everything he told the police was a lie.

Digging into the past is bound to shake up the present, and when Brynn begins to investigate what happened in the woods that day, she uncovers secrets that might change everything—about Saint Ambrose, about Mr. Larkin, and about her ex-best friend, Tripp Talbot.

Four years ago someone got away with murder. More terrifying is that they might be closer than anyone thinks.

Karen M. McManus is a #1 New York Times and international bestselling author of young adult thrillers. Her books include the One of Us Is Lying series, which has been turned into a television show on Peacock, as well as the standalone novels Two Can Keep a Secret, The Cousins, You’ll Be the Death of Me, and Nothing More to Tell. Karen's critically acclaimed, award-winning work has been translated into more than forty-two languages.

★ "An edge-of-your-seat page-turner; the strongest yet from a master of the genre." —Kirkus Reviews, starred review

★ "McManus’s latest is a win for mystery and suspense fans and has a little something for everyone." —School Library Journal, starred review

★ "No one is who they appear to be in this twisty, shocking thriller by Karen M. McManus...Riveting." —Shelf Awareness, starred review

"Karen M. McManus continues her reign as the YA thriller queen." —PopSugar

“Absolutely no one does thrillers like Karen McManus…” —Paste

“McManus never gives readers a moment to relax, drawing out suspects and secrets in rapid succession. . . . Brimming with twists and turns.” —BookPage