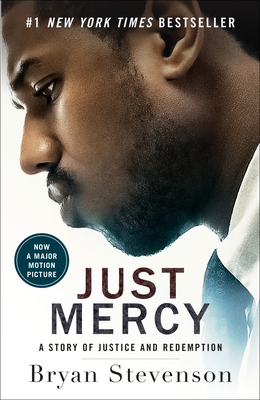 “The history of incarceration in America is deeply colored by our history of racism and poverty. Stevenson's work providing legal aid to death row inmates exposes truly inhumane, unjust practices and astonishing legal carelessness often fueled by outright prejudice. Just Mercy does not stop at reportage, but examines the costs to the individual, the family, the community, and society at large of these practices. This is a powerful book about one man's efforts to address injustice and a clarion call for reform not just for those imprisoned, but for a society that has lost its way.”
— Sheryl Cotleur, Copperfield's Books, Sebastopol, CA

#1 NEW YORK TIMES BESTSELLER • NOW A MAJOR MOTION PICTURE STARRING MICHAEL B. JORDAN AND JAMIE FOXX • A powerful true story about the potential for mercy to redeem us, and a clarion call to fix our broken system of justice—from one of the most brilliant and influential lawyers of our time.

“[Bryan Stevenson’s] dedication to fighting for justice and equality has inspired me and many others and made a lasting impact on our country.”—John Legend

Bryan Stevenson was a young lawyer when he founded the Equal Justice Initiative, a legal practice dedicated to defending those most desperate and in need: the poor, the wrongly condemned, and women and children trapped in the farthest reaches of our criminal justice system. One of his first cases was that of Walter McMillian, a young man who was sentenced to die for a notorious murder he insisted he didn’t commit. The case drew Bryan into a tangle of conspiracy, political machination, and legal brinksmanship—and transformed his understanding of mercy and justice forever.

Just Mercy is at once an unforgettable account of an idealistic, gifted young lawyer’s coming of age, a moving window into the lives of those he has defended, and an inspiring argument for compassion in the pursuit of true justice.

“Every bit as moving as To Kill a Mockingbird, and in some ways more so . . . a searing indictment of American criminal justice and a stirring testament to the salvation that fighting for the vulnerable sometimes yields.”—David Cole, The New York Review of Books

“You don’t have to read too long to start cheering for this man. . . . The message of this book . . . is that evil can be overcome, a difference can be made. Just Mercy will make you upset and it will make you hopeful.”—Ted Conover, The New York Times Book Review

“Inspiring . . . a work of style, substance and clarity . . . Stevenson is not only a great lawyer, he’s also a gifted writer and storyteller.”—The Washington Post

“As deeply moving, poignant and powerful a book as has been, and maybe ever can be, written about the death penalty.”—The Financial Times

Bryan Stevenson is the executive director of the Equal Justice Initiative in Montgomery, Alabama, and a professor of law at New York University Law School. He has won relief for dozens of condemned prisoners, argued five times before the Supreme Court, and won national acclaim for his work challenging bias against the poor and people of color. He has received numerous awards, including the MacArthur Foundation “Genius” Grant.

“Just Mercy is every bit as moving as To Kill a Mockingbird, and in some ways more so. . . . [It] demonstrates, as powerfully as any book on criminal justice that I’ve ever read, the extent to which brutality, unfairness, and racial bias continue to infect criminal law in the United States. But at the same time that [Bryan] Stevenson tells an utterly damning story of deep-seated and widespread injustice, he also recounts instances of human compassion, understanding, mercy, and justice that offer hope. . . . Just Mercy is a remarkable amalgam, at once a searing indictment of American criminal justice and a stirring testament to the salvation that fighting for the vulnerable sometimes yields.”—David Cole, The New York Review of Books

“A searing, moving and infuriating memoir . . . Bryan Stevenson may, indeed, be America’s Mandela. For decades he has fought judges, prosecutors and police on behalf of those who are impoverished, black or both. . . . Injustice is easy not to notice when it affects people different from ourselves; that helps explain the obliviousness of our own generation to inequity today. We need to wake up. And that is why we need a Mandela in this country.”—Nicholas Kristof, The New York Times

“Unfairness in the justice system is a major theme of our age. . . . This book brings new life to the story by placing it in two affecting contexts: [Bryan] Stevenson’s life work and the deep strain of racial injustice in American life. . . . You don’t have to read too long to start cheering for this man. Against tremendous odds, Stevenson has worked to free scores of people from wrongful or excessive punishment, arguing five times before the Supreme Court. . . . The book extols not his nobility but that of the cause, and reads like a call to action for all that remains to be done. . . . The message of the book, hammered home by dramatic examples of one man’s refusal to sit quietly and countenance horror, is that evil can be overcome, a difference can be made. Just Mercy will make you upset and it will make you hopeful. . . . Stevenson has been angry about [the criminal justice system] for years, and we are all the better for it.”—Ted Conover, The New York Times Book Review

“Not since Atticus Finch has a fearless and committed lawyer made such a difference in the American South. Though larger than life, Atticus exists only in fiction. Bryan Stevenson, however, is very much alive and doing God’s work fighting for the poor, the oppressed, the voiceless, the vulnerable, the outcast, and those with no hope. Just Mercy is his inspiring and powerful story.”—John Grisham

“Bryan Stevenson is one of my personal heroes, perhaps the most inspiring and influential crusader for justice alive today, and Just Mercy is extraordinary. The stories told within these pages hold the potential to transform what we think we mean when we talk about justice.”—Michelle Alexander, author of The New Jim Crow

“A passionate account of the ways our nation thwarts justice and inhumanely punishes the poor and disadvantaged.”—Booklist (starred review)

“From the frontlines of social justice comes one of the most urgent voices of our era. Bryan Stevenson is a real-life, modern-day Atticus Finch who, through his work in redeeming innocent people condemned to death, has sought to redeem the country itself. This is a book of great power and courage. It is inspiring and suspenseful—a revelation.”—Isabel Wilkerson, author of The Warmth of Other Suns

“Words such as important and compelling may have lost their force through overuse, but reading this book will restore their meaning, along with one’s hopes for humanity.”—Tracy Kidder, Pulitzer Prize–winning author of Mountains Beyond Mountains

“Bryan Stevenson is America’s young Nelson Mandela, a brilliant lawyer fighting with courage and conviction to guarantee justice for all. Just Mercy should be read by people of conscience in every civilized country in the world to discover what happens when revenge and retribution replace justice and mercy. It is as gripping to read as any legal thriller, and what hangs in the balance is nothing less than the soul of a great nation.”—Desmond Tutu, Nobel Peace Prize Laureate