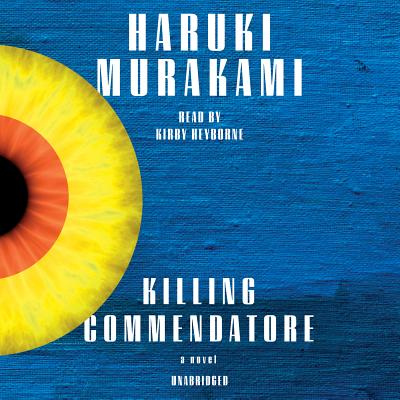 By Haruki Murakami, Kirby Heyborne (Read by)
$60.00
Email or call for price.

In Killing Commendatore, a thirty-something portrait painter in Tokyo is abandoned by his wife and finds himself holed up in the mountain home of a famous artist, Tomohiko Amada. When he discovers a previously unseen painting in the attic, he unintentionally opens a circle of mysterious circumstances. To close it, he must complete a journey that involves a mysterious ringing bell, a two-foot-high physical manifestation of an Idea, a dapper businessman who lives across the valley, a precocious thirteen-year-old girl, a Nazi assassination attempt during World War II in Vienna, a pit in the woods behind the artist’s home, and an underworld haunted by Double Metaphors. A tour de force of love and loneliness, war and art—as well as a loving homage to The Great Gatsby—Killing Commendatore is a stunning work of imagination from one of our greatest writers.

HARUKI MURAKAMI was born in Kyoto in 1949 and now lives near Tokyo. His work has been translated into more than fifty languages, and the most recent of his many international honors is the Hans Christian Andersen Literature Award, whose previous recipients include J. K. Rowling, Isabel Allende, and Salman Rushdie.

Kirby Heyborne is an American musician and actor. After graduating from the University of Utah with a degree in economics, he received critical acclaim for his starring role in the award-winning World War II drama Saints and Soldiers. He has starred in many feature films and national commercials, and has appeared on Everwood and Free Ride. He is well known for his narration and voice work on several audiobooks. In addition, he can frequently be found touring the country with his singing and songwriting act.

“[Murakami] is as masterful as ever at building an intricate narrative and keeping his audience in suspense. Killing Commendatore is both a testament to the transformational power of art and a cautionary tale on the dangers of exploration.” —Houston Chronicle

“A spellbinding parable of art, history, and human loneliness.” —O, The Oprah Magazine

“Expansive and intricate . . . touches on many of the themes familiar in Mr. Murakami’s novels: the mystery of romantic love, the weight of history, the transcendence of art, the search for elusive things just outside our grasp.” —The New York Times

“Eccentric and intriguing, Killing Commendatore is the product of a singular imagination. . . . Murakami is a wiz at melding the mundane with the surreal. . . . He has a way of imbuing the supernatural with uncommon urgency. His placid narrative voice belies the utter strangeness of his plot. . . . The worldview of Murakami’s novels is consistent, and it’s invigorating. In this book and many that came before it, he urges us to embrace the unusual, accept the unpredictable.” —San Francisco Chronicle

“Beguiling. . . . Murakami is brilliant at folding the humdrum alongside the supernatural; finding the magic that’s nested in life’s quotidian details. . . . His prose is warm, conversational and studded with quiet profundities. He’s eminently good company; that most precious of qualities that we look for in an author. We trust him to get us entertainingly lost, just as we trust that he’ll eventually get us home.” —The Guardian

“Exhilarating. . . . Only in the calm madness of his magical realism can Murakami truly capture one of his obsessions, the usually ineffable yearning that drives a person to make art.” —The Washington Post

“Another intriguing, time-challenging tome you can’t wait to finish . . . while simultaneously wishing you might never reach its conclusion, dreading the end of another indescribable Murakami odyssey.” —The Christian Science Monitor

“Some novelists hold a mirror up to the world and some, like Haruki Murakami, use the mirror as a portal to a universe hidden beyond it. . . . What can't be denied is Mr. Murakami's irresistible storytelling ability. He builds his self-contained world deliberately and faithfully, developing intrigue and suspense and even taking care to give each chapter a cliffhanger ending as in an old-fashioned serialized novel.” —The Wall Street Journal

“No other author mixes domestic, fantastic and esoteric elements into such weirdly bewitching shades. . . . Just as he straddles barriers dividing high art from mass entertainment, so he suspends borders between east and west.” —Financial Times

“Wild, thrilling. . . . Murakami is a master storyteller and he knows how to keep us hooked.” —The Sunday Times (London)

“[Killing Commendatore] marks the return of a master.” —Esquire

“More of Murakami’s magical mist, but its size, beauty, and concerns with lust and war bring us back to the vividness and scale of his 1997 epic, The Wind-up Bird Chronicle.’’ —The Boston Globe

“No ordinary trip; get ready for a wild ride.” —Entertainment Weekly

“A perfect balance of tradition and individual talent. . . . Murakami dancing along ‘the inky blackness of the Path of Metaphor’ is like Fred Astaire dancing across a floor, then up the walls and onto the ceiling.” —The Spectator