The Golden House: A Novel (CD-Audio) 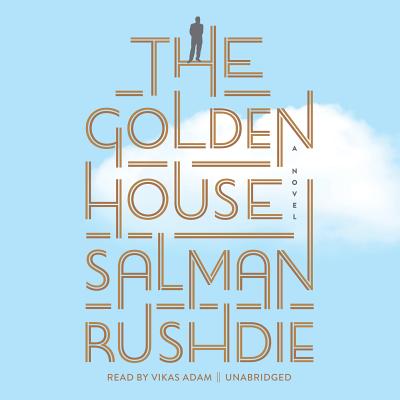 By Salman Rushdie, Vikas Adam (Read by)
Hard to Find - May not be reprinted

NEW YORK TIMES BESTSELLER • A modern American epic set against the panorama of contemporary politics and culture—a hurtling, page-turning mystery that is equal parts The Great Gatsby and The Bonfire of the Vanities

On the day of Barack Obama’s inauguration, an enigmatic billionaire from foreign shores takes up residence in the architectural jewel of “the Gardens,” a cloistered community in New York’s Greenwich Village. The neighborhood is a bubble within a bubble, and the residents are immediately intrigued by the eccentric newcomer and his family. Along with his improbable name, untraceable accent, and unmistakable whiff of danger, Nero Golden has brought along his three adult sons: agoraphobic, alcoholic Petya, a brilliant recluse with a tortured mind; Apu, the flamboyant artist, sexually and spiritually omnivorous, famous on twenty blocks; and D, at twenty-two the baby of the family, harboring an explosive secret even from himself. There is no mother, no wife; at least not until Vasilisa, a sleek Russian expat, snags the septuagenarian Nero, becoming the queen to his king—a queen in want of an heir.

Our guide to the Goldens’ world is their neighbor René, an ambitious young filmmaker. Researching a movie about the Goldens, he ingratiates himself into their household. Seduced by their mystique, he is inevitably implicated in their quarrels, their infidelities, and, indeed, their crimes. Meanwhile, like a bad joke, a certain comic-book villain embarks upon a crass presidential run that turns New York upside-down.

Set against the strange and exuberant backdrop of current American culture and politics, The Golden House also marks Salman Rushdie’s triumphant and exciting return to realism. The result is a modern epic of love and terrorism, loss and reinvention—a powerful, timely story told with the daring and panache that make Salman Rushdie a force of light in our dark new age.

Praise for The Golden House

“A recognizably Rushdie novel in its playfulness, its verbal jousting, its audacious bravado, its unapologetic erudition, and its sheer, dazzling brilliance.”—The Boston Globe

“A joy to read . . . clever, intimidating, jocund, and electrifying.”—Chicago Review of Books

“The Golden House . . . ranks among Rushdie’s most ambitious and provocative books [and] displays the quicksilver wit and playful storytelling of Rushdie’s best work.”—USA Today

“From Nero to Obama, via The Godfather . . . The veteran novelist blends ancient history and myth with popular culture, crime caper and film techniques to fashion a morality tale for today.”—The Guardian

“A tale of identity, reinvention, truth (and lies), and terror, The Golden House captures the climate of American politics and culture from the Obama era to today.”—BuzzFeed

“The Golden House is a brilliant examination of the times we are living in today. A must read!”—PopSugar

“Powerful. . . . The great strength of The Golden House is Rushdie’s ability to balance the fairy tale tone of the story with gritty realities.”—The Toronto Star

“A sort of Great Gatsby for our time: everyone is implicated, no one is innocent, and no one comes out unscathed.”—Kirkus Reviews (starred review)