The Feminist War on Crime: The Unexpected Role of Women's Liberation in Mass Incarceration (Hardcover) 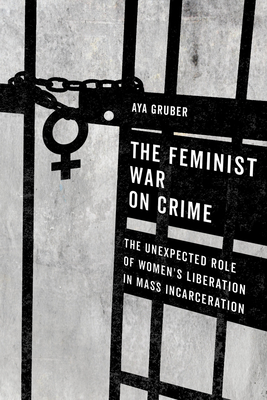 Many feminists grapple with the problem of hyper-incarceration in the United States, and yet commentators on gender crime continue to assert that criminal law is not tough enough. This punitive impulse, prominent legal scholar Aya Gruber argues, is dangerous and counterproductive. In their quest to secure women’s protection from domestic violence and rape, American feminists have become soldiers in the war on crime by emphasizing white female victimhood, expanding the power of police and prosecutors, touting the problem-solving power of incarceration, and diverting resources toward law enforcement and away from marginalized communities.

In order to reverse this troubling course, Gruber contends that we must abandon the conventional feminist wisdom, fight violence against women without reinforcing the American prison state, and use criminalization as a technique of last—not first—resort.

Aya Gruber is the Ira C. Rothgerber Professor of Constitutional Law and Criminal Justice at the University of Colorado Law School. A former public defender, she is a frequent commentator on criminal justice issues. She has appeared on ABC, NBC, and PBS, and her work has been featured in the New York Times, Denver Post, and Associated Press.

“This interesting, densely written, challenging book illustrates the phenomenon of unintended consequences. . . . Following from Gruber's main point that now is the time to recognize that incarceration is not a solution, the state should concentrate on increasing the resources available to women affected by domestic violence, sexual assault, and rape. . . . Highly recommended.”
— CHOICE

"Gruber offers an exciting and brave book that tackles the cause and effect between gender-based violence, mass incarceration, and a broken legal system."
— PEN America

"The Feminist War on Crime is a timely call for feminists to reckon with the harms of the criminal institutions they helped to build. Ultimately, Gruber is asking for a new wave of feminism that prioritizes material gains for all women over expressive protection for the elite few. . . . The key lesson from Gruber’s book is that instead of punishing our way into good governance, feminists should define new modes for accountability and devote energy toward the provision of resources that actually improve the lives of women. As Gruber argues, now is the time for millennial feminists to move away from punishment."
— Harvard Law Review

"The Feminist War on Crime is at the same time provocative, educational, and necessary for our moment where people are beginning to question the utility of imprisonment as a panacea for social ills without denying the fact that those ills demand our attention and effort."
— Law & Society Review

"Gruber brings to light the ties between feminist movements and mass incarceration in this deeply researched, timely analysis."
— Library Journal