An Archive of Hope: Harvey Milk's Speeches and Writings (Hardcover) 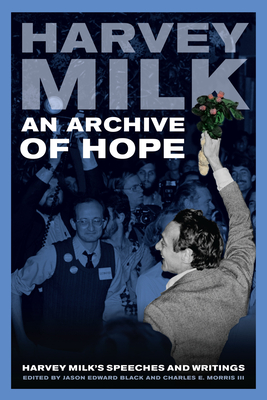 Harvey Milk was one of the first openly and politically gay public officials in the United States, and his remarkable activism put him at the very heart of a pivotal civil rights movement reshaping America in the 1970s. An Archive of Hope is Milk in his own words, bringing together in one volume a substantial collection of his speeches, columns, editorials, political campaign materials, open letters, and press releases, culled from public archives, newspapers, and personal collections.

The volume opens with a foreword from Milk’s friend, political advisor, and speech writer Frank Robinson, who remembers the man who “started as a Goldwater Republican and ended his life as the last of the store front politicians” who aimed to “give ‘em hope” in his speeches. An illuminating introduction traces GLBTQ politics in San Francisco, situates Milk within that context, and elaborates the significance of his discourse and memories both to 1970s-era gay rights efforts and contemporary GLBTQ worldmaking.

Jason Edward Black is Associate Professor of Communication Studies and an affiliate professor in Gender and Race Studies at The University of Alabama in Tuscaloosa. He is the co-editor of Arguments about Animal Ethics.
Charles E. Morris III is Professor in the Department of Communication and Rhetorical Studies at Syracuse University and editor of Remembering the AIDS Quilt, Queering Public Address and co-editor of Readings on the Rhetoric of Social Protest.
Foreword: Frank Robinson, friend and speechwriter of Harvey Milk; member of Chicago Gay Liberation in the early 1970s, helped shape the rhetoric that Milk used to inspire the LGBT community across the country in the late 1970s. Robinson was a journalist for many years, has written numerous novels, several of which were turned into films (including the Towering Inferno). Robinson had a cameo role in the film Milk.

"These selections capture the voice of this coalition builder who worked to forge connections between unions and gay people and poorer and other people in the Castro district. . . . Recommended."
— CHOICE

"A useful record of the beliefs of an important figure and the battles of the 1970s."
— Times Literary Supplement

"An important contribution to the corpus of work on Harvey Milk as a writer and an orator."
— Gay & Lesbian Review Worldwide

"An Archive of Hope is a remarkable contribution to GLBTQ history and the ways in which that history might shape our presents and futures."
— Rhetoric & Public Affairs