Paintings in Proust: A Visual Companion to In Search of Lost Time (Paperback) 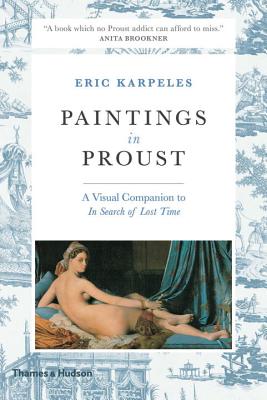 A visually stunning and surprisingly accessible book that brings out subtle facets of Proust’s masterpiece, as well as the artworks he cites. —Art in America

A la recherche du temps perdu by Marcel Proust is one of the most profoundly visual works in Western literature. Not only are there frequent references to specific works of art, but certain characters are also evoked by comparison to particular paintings. Bloch’s appearance as a boy is likened to the portrait of Mehmet II by Gentile Bellini; Odette de Crécy strikes Swann by her resemblance to a figure in a Botticelli fresco. Even the lesser figure of a certain Mme. Blattin becomes the subject of Proustian mischief by being described as “exactly the portrait of Savonarola by Fra Bartolomeo.” Eric Karpeles has identified and located the many paintings to which Proust makes reference and sets them alongside the relevant text from the novel; in other cases, where only a painter’s name is mentioned to indicate a certain style or appearance, Karpeles has chosen a representative work to illustrate the impression that Proust sought to evoke.

With some 200 paintings beautifully reproduced in full color and texts drawn from the Moncrieff/Kilmartin/Enright translation, as well as concise commentaries on the evolving narrative, this book is an essential addition to the libraries of Proustians everywhere. The book also includes an authoritative introduction and a comprehensive index of artists and paintings mentioned in the novel.

Eric Karpeles is a painter as well as writer and translator. Author of Almost Nothing: The 20th-Century Art and Life of Józef Czapski, he is a fellow of the Czeslaw Milosz Institute at Claremont McKenna College.