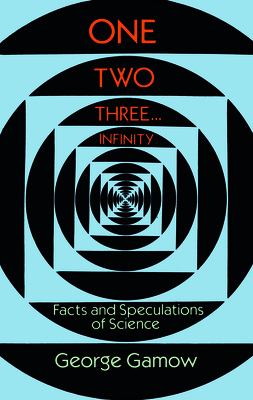 By George Gamow
$12.95
On Our Shelves Now. Click on the title to see details.

". . . full of intellectual treats and tricks, of whimsy and deep scientific philosophy. It is highbrow entertainment at its best, a teasing challenge to all who aspire to think about the universe." -- New York Herald Tribune
One of the world's foremost nuclear physicists (celebrated for his theory of radioactive decay, among other accomplishments), George Gamow possessed the unique ability of making the world of science accessible to the general reader.
He brings that ability to bear in this delightful expedition through the problems, pleasures, and puzzles of modern science. Among the topics scrutinized with the author's celebrated good humor and pedagogical prowess are the macrocosm and the microcosm, theory of numbers, relativity of space and time, entropy, genes, atomic structure, nuclear fission, and the origin of the solar system.
In the pages of this book readers grapple with such crucial matters as whether it is possible to bend space, why a rocket shrinks, the "end of the world problem," excursions into the fourth dimension, and a host of other tantalizing topics for the scientifically curious. Brimming with amusing anecdotes and provocative problems, One Two Three . . . Infinity also includes over 120 delightful pen-and-ink illustrations by the author, adding another dimension of good-natured charm to these wide-ranging explorations.
Whatever your level of scientific expertise, chances are you'll derive a great deal of pleasure, stimulation, and information from this unusual and imaginative book. It belongs in the library of anyone curious about the wonders of the scientific universe. "In One Two Three . . . Infinity, as in his other books, George Gamow succeeds where others fail because of his remarkable ability to combine technical accuracy, choice of material, dignity of expression, and readability." -- Saturday Review of Literature

Modern Science Made Easy By one of the leading physicists of the twentieth century, George Gamow's One, Two, Three...Infinity is one of the most memorable popular books on physics, mathematics, and science generally ever written, famous for having, directly or indirectly, launched the academic and/or scientific careers of many young people whose first real encounter with the wonders and mysteries of mathematics and science was through reading this book as a teenager. Untypically for popular science books, this one is enhanced by the author's own delightful sketches. Reviewers were enthusiastic when One, Two, Three...Infinity was published in 1947. In the Author's Own Words: "If and when all the laws governing physical phenomena are finally discovered, and all the empirical constants occurring in these laws are finally expressed through the four independent basic constants, we will be able to say that physical science has reached its end, that no excitement is left in further explorations, and that all that remains to a physicist is either tedious work on minor details or the self-educational study and adoration of the magnificence of the completed system. At that stage physical science will enter from the epoch of Columbus and Magellan into the epoch of the National Geographic Magazine!" -- George Gamow Critical Acclaim for One, Two, Three...Infinity "This skillful presentation is for the non-professional and professional scientist. It will broaden the knowledge of each and give the imagination wide play." -- Chemistry and Engineering News "A stimulating and provocative book for the science-minded layman." -- Kirkus Reviews "This is a layman's book as readable as a historical novel, but every chapter bears the solid imprint of authoritative research." -- San Francisco Chronice "George Gamow succeeds where others fail because of his remarkable ability to combine technical accuracy, choice of material, dignity of expression, and readability." -- Saturday Review of Literature