Stars of the American Musical Theater in Historic Photographs (Paperback) 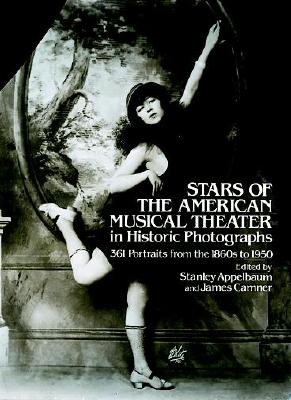 By Stanley Appelbaum (Editor), James Camner (Editor)
Out of Print

Irving Berlin, George Gershwin, Richard Rodgers the names of composers of great American musicals are household words. But many of the stars who introduced these songwriters' classic triumphs and whose names were on everybody's lips a few decades ago have been all but forgotten. Now, with this book, you can take a fascinating journey into the days when Lillian Russell and Frank Daniels, or Marilyn Miller and William Gaxton, were as celebrated as the superstars of television and film are today.
This volume is the most complete collection of its kind. Its 361 vivid portraits of over 400 star entertainers of the past cover the whole spectrum of nearly a century of American musical theater. The portraits, many by the finest celebrity photographers of their day, and many of which are autographed presentation copies, are complemented by full captions exceptionally rich with information; together, they constitute a history of the American musical, its stars and supporting casts, its remembered and forgotten successes.
Brimming with life and personality, these portraits capture yesterday's stars in their most characteristic moods and postures. Along with scores of charming views of personalities as well-known on the screen as on the stage Bob Hope, W. C. Fields, Ann Sothern, Fred Astaire, to name but a few are shots of hundreds of performers who have been virtually or entirely forgotten because they were stars only or at least primarily "of the stage" Emma Trentini, Donald Brian, Nora Bayes, Fritzi Scheff, Lew Fields, Vernon and Irene Castle, Edith Day, Eugene and Willie Howard, Mary Ellis, Dennis King, Elsie Janis, Ray Middleton, Jack Whiting, Todd Duncan, and many, many more.
More than just a stunning portrait gallery, this book will challenge the imaginations and knowledge of musical-theater and nostalgia buffs. Among its hundreds of facts and photos are such special treats as shots grouped together of the original stars of "Show Boat," "Oklahoma " and "South Pacific"; portraits of composers who also performed in their own shows, like George M. Cohan, Eubie Blake, and Irving Berlin; fascinating views of today's television and film stars in their youth, along with information on their early, often little-known stage appearances; and notes on the first performances of song classics like "I Wonder Who's Kissing Her Now," "Night and Day," and "Bewitched, Bothered and Bewildered."
Unfortunately, in this age of electronics and breathless change, the days of vaudeville, operetta, revue, and early musical comedy have been too quickly forgotten. This book makes them a joy to remember. Besides being an invaluable aid to theatrical scholars, it will delight musical-theater enthusiasts and anyone wishing to revive the excitement of a fascinating segment of American entertainment history.

Stanley Appelbaum served for decades as Dover's Editor in Chief until his retirement in 1996. He continues to work as a selector, compiler, editor, and translator of literature in a remarkable range of languages that includes Spanish, Italian, French, German, and Russian.