Taking It to the Streets: The Social Protest Theater of Luis Valdez and Amiri Baraka (Theater: Theory/Text/Performance) (Hardcover) 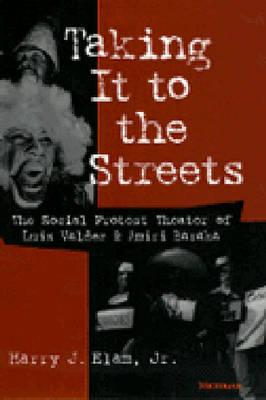 The performances of Luis Valdez's El Teatro Campesino, the farmworkers' theater, and Amiri Baraka's (LeRoi Jones's) Black Revolutionary Theater (BRT) during the 1960s and 1970s, offer preeminent examples of social protest theater during a momentous and tumultuous historical juncture. The performances of these groups linked the political, the cultural, and the spiritual, while agitating against the dominant power structure and for the transformation of social and theatrical practices in the U.S. Founded during the Delano Grape Pickers' Strike and Black Power rebellions of the mid-1960s, both El Teatro and the BRT professed cultural pride and group unity as critical corollaries to self-determination and revolutionary social action.
Taking It to the Streets compares the performance methodologies, theories, and practices of the two groups, highlighting their cross-cultural commonalties, and providing insights into the complex genre of social protest performance and its interchange with its audience. It examines the ways in which ritual can be seen to operate within the productions of El Teatro and the BRT, uniting audience and performers in subversive, celebratory protest by transforming spectators into active participants within the theater walls --and into revolutionary activists outside. During this critical historical period, these performances not only encouraged community empowerment, but they inculcated a spirit of collective faith and revolutionary optimism. Elam's critical reexamination and recontextualization of the ideologies and practices of El Teatro and the BRT aid in our understanding of contemporary manipulations of identity politics, as well as current strategies for racial representation and cultural resistance.
"A major contribution to our understanding of how social protest came to be so strong and how Black and Chicano theatre contributed to the synergy of those times." --Janelle Reinelt, University of California, Davis
Harry J. Elam, Jr., is Associate Professor of Drama and Director of the Committee on Black Performing Arts, Stanford University.

Harry J. Elam, Jr., is Associate Professor of Drama and Director of the Committee on Black Performing Arts, Stanford University.

"A major contribution to our understanding of how social protest came to be so strong and how Black and Chicano theatre contributed to the synergy of those times."
—Janelle Reinelt, University of California, Davis

"This excellent book provides both a broad picture of the nature of social protest theater and a look at the particular plays produced by Valdez and Baraka."
—Choice

"Overall, Elam succeeds in analyzing two political theaters that shared synergistic performance techniques that contributed to the spirit of ethnic unity and commitment to the social protest nationwide. He provides insights on the effective dramatic techniques used to address Chicano and Black cultural nationalism. This book is well-researched, logically organized, and a good addition to Chicano and black theater history. It provides new insights into the theory and development of social protest theater, and it will appeal to Chicano and Black performing artists and scholarly readers alike."
—New Mexico Historical Review

". . . a compelling comparative study of how the social protest performance traditions developed by Teatro Campesino and Black Revolutionaryh Theater between 1965 and 1971 contribute to a phenomenology of political activism and cultural politics in the U.S.A. . . . This book is a must read for those interested in exploring the intersections between performance and aesthetics and social protest theatre. Harry J. Elam Jr.'s elegant prose, original narrative structure, and rigorous analysis of performance texts and their contexts make this book a compelling addition to the studies on political theatre and the ideological nuances they bring to concepts of cultural identity and politics."
—The Drama Review, Winter 2004

"Elam's understanding of ritual is complex and compelling without being densely unapproachable. . . . While Elam's project is not centered on historical documentation, his work nonetheless offers excellent accounts of these two important American theatre companies. As Elam has clearly delineated the features of Valdez's and Baraka's brand of protest theatre, however, this text could move beyond the history or criticism classroom into the production studio. Directors, performers, and designers will discover strategies for empowering audiences and potentially shifting the social order."
—Joni L. Jones, University of Texas, Austin, Theatre Journal