The Debatable Land: The Lost World Between Scotland and England (Paperback) 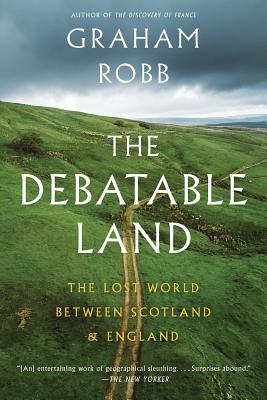 "[An] entertaining work of geographical sleuthing.…Surprises abound." —The New Yorker

An oft-overlooked region lies at the heart of British national history: the Debatable Land. The oldest detectable territorial division in Great Britain, the Debatable Land once served as a buffer between England and Scotland. It was once the bloodiest region in the country, fought over by Henry VIII, Elizabeth I, and James V. After most of its population was slaughtered or deported, it became the last part of Great Britain to be brought under the control of the state. Today, its boundaries have vanished from the map and are matters of myth and generational memories. In The Debatable Land, historian Graham Robb recovers the history of this ancient borderland in an exquisite tale that spans Roman, Medieval, and present-day Britain. Rich in detail and epic in scope, The Debatable Land provides a crucial, missing piece in the puzzle of British history.

Graham Robb is the author of three prize-winning biographies, each selected as New York Times Best Books. His most recent works, The Discovery of Middle Earth, Parisians, and The Discovery of France have earned several awards. He lives on the Anglo-Scottish border.

Robb intercuts the past and present, the intimate and the impersonal, to wonderful effect. Few authors write so well about things lost and neglected—or have such sharp ears and eyes for the natural world.
— Ian Jack - Guardian

A detective outing on native soil. Armed with energy, humour, a poet’s eye and a bicycle—all things his fans will be familiar with—Robb probes the received wisdoms of the past… His skill as a writer is to understand, without being fey, the fourth dimension: peeling back the modern landscape to find buried stories.
— Times (UK)

Graham Robb, apart from being a distinguished historian, biographer and literary critic, is one of our most accomplished travel writers.… [He] bicycles with the speed and ferocity of a Scottish reiver through these lost flatlands of history.
— Spectator

Focusing on this one remarkable region, Robb’s two-wheeled perspective and highly observant eye allow him to ruminate through the Celtic, medieval, and present eras with ease; readers are lucky to join him on his enthralling journey.
— Publishers Weekly (starred review)

An imagination-stimulating work in which the past seems to ‘dissolve and reshape itself.’
— Kirkus Reviews (starred review)