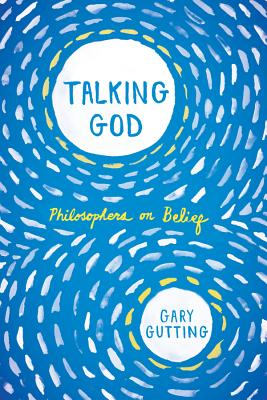 By Gary Gutting
$16.95
Special Order from the publisher

Through interviews with twelve distinguished philosophers—including atheists, agnostics, and believers—Talking God works toward a philosophical understanding and evaluation of religion. Along the way, Gary Gutting and his interviewees challenge many common assumptions about religious beliefs.

As tensions simmer, and often explode, between the secular and the religious forces in modern life, the big questions about human belief press ever more urgently. Where does belief, or its lack, originate? How can we understand and appreciate religious traditions different from our own? Featuring conversations with twelve skeptics, atheists, agnostics, and believers—including Alvin Plantinga, Philip Kitcher, Michael Ruse, and John Caputo—Talking God offers new perspectives on religion, including the challenge to believers from evolution, cutting-edge physics and cosmology; arguments both for and against atheism; and meditations on the value of secular humanism and faith in the modern world. Experts offer insights on Islam, Buddhism, and Hinduism, as well as Judaism and Christianity. Topical and illuminating, Talking God gives readers a deeper understanding of faith today and how philosophers understand it.

“[Some say] Buddhism is not a religion because Buddhists don’t believe in a supreme being. This simply ignores the fact that many religions are not theistic in this sense. Chess is a game, despite the fact that it is not played with a ball, after all.”

—Louise Antony, from chapter 2, “A Case for Atheism”

“There are a large number—maybe a couple of dozen—of pretty good theistic arguments. None is conclusive, but each, or at any rate the whole bunch taken together, is about as strong as philosophical arguments ordinarily get.”

—Alvin Plantinga, from chapter 1, “A Case for Theism”

“If you cease to ‘believe’ in a particular religious creed, like Calvinism or Catholicism, you have changed your mind and adopted a new position— But if you lose ‘faith,’—everything is lost. You have lost your faith in life, lost hope in the future, lost heart, and you cannot go on.”

Gary Gutting (1942—2019) was the John A. O’Brien Professor of Philosophy at the University of Notre Dame. He edited Notre Dame Philosophical Reviews, was a contributor to the New York Times’s philosophy blog, The Stone, and was the author of What Philosophy Can Do.

Approachable, civilized discussions about the existence of God…Gutting and his collaborators present a welcome respite to the vitriolic works of the New Atheists—Hitchens, Dawkins et al.—offering reasoned, civil, and fair explorations of timeless issues. In each case, whether theist, agnostic, or atheist, the interlocutors discuss with respect for opposing views and with humility for what questions can and cannot be fully answered. Rather than seeing the argument as a contest to be won or lost, these philosophers honor the reality that larger issues of justice and morality are at play…An exceptional introduction to the philosophical questions surrounding God and atheism.

Gutting shows himself to be a generous interviewer, with exchanges that sharpen and expand the interviewee’s positions rather than shut down or bolster them…This book is for those new to [philosophy] who are curious about whether its tools enhance understanding.

Provides a helpful introduction to anyone interested in the intersection of philosophy and religion.