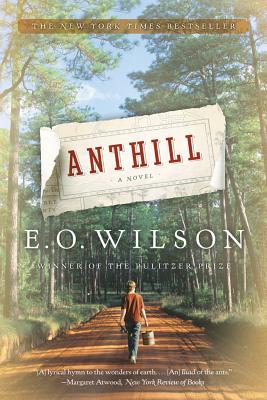 “Three parallel viewpoints--of ants, developers, and environmentalists--are woven together in this novel by the Pulitzer Prize-winning science writer, who turns to fiction at age 81. Wilson tells the wonderful story of a young boy from Alabama who grows up to do battle to save his beloved forest. This magical tale reminds us of the life-and-death struggle that is going on all around us to protect our wilderness.”
— Karen Harris, Andover Bookstore, Andover, MA

“Three parallel viewpoints -- of ants, developers, and environmentalists --are woven together in this novel by the Pulitzer Prize-winning science writer, who turns to fiction at age 81. Wilson tells the wonderful story of a young boy from Alabama who grows up to do battle to save his beloved forest. This magical tale reminds us of the life-and-death struggle that is going on all around us to protect our wilderness.”
— Karen Harris, Andover Bookstore, Andover, MA

Winner of the 2010 Heartland Prize, Anthill follows the thrilling adventures of a modern-day Huck Finn, enthralled with the "strange, beautiful, and elegant" world of his native Nokobee County. But as developers begin to threaten the endangered marshlands around which he lives, the book’s hero decides to take decisive action. Edward O. Wilson—the world’s greatest living biologist—elegantly balances glimpses of science with the gripping saga of a boy determined to save the world from its most savage ecological predator: man himself.

Edward O. Wilson is the author of more than thirty books, including Anthill,?Letters to a Young Scientist, and The Conquest of Nature. The winner of two Pulitzer Prizes, Wilson is a professor emeritus at Harvard University and lives with his wife in Lexington, Massachusetts.

One part of Anthill, by the world’s leading myrmecologist, demonstrates that in Mr Wilson ants have found not only their Darwin but also their Homer…The tale within a tale is an astonishing literary achievement; nobody but Mr Wilson could have written it, and those who read it will tread lightly in the forest, at least for a while…his evocation of their ways is a more powerful tool for raising ecological awareness than any Disneyfication is likely to be.

Wilson’s foray into fiction allows him to write more expressively, psychologically, even spiritually about the great web of life, humankind included, and the irrefutable rules for ecological survival…A teacher as well as a scientist, Wilson uses the prism of fiction to cast new light on the grand unifying lesson of nature: all of us earthlings, all of life’s astonishing creations, thrive or fail together.
— Donna Seaman - Chicago Tribune

The astute, knowledgeable, amazing structure of Anthill is a masterpiece of craft, a fictional embodiment of the ant.

[A] beautifully written coming-of-age novel about a young boy in Alabama. The highly respected author and entomologist may be sneaking some science down the throats of self-respecting fiction readers everywhere with the tale of a boy-turned-environmental lawyer who tries to save wildlife, but we hardly mind.
— The Daily Beast

Lush with organic details, Wilson’s keen eye for the natural world and his acumen for environmental science is on brilliant display in this multifaceted story about human life and its connection to nature.
— Publishers Weekly, starred review

The savage conflicts between the Trailhead and Waterside colonies are as dramatic as any epic of Herodotus or Thucydides, histories Wilson evokes in his characterization of the tiny warriors as myrmidons and hoplites.
— Harvey Freedenberg - Shelf Awareness

A triumphant epic of life by the world’s greatest naturalist. This is War and Peace—among the ants, the land developers, and the environmentalists and preachers. Marvel at E. O. Wilson’s wondrous and captivating creation.

It’s slightly mysterious how E. O. Wilson manages to combine so many different talents in one person—from close observation to grand theorizing to deep compassion to well-paced, lively writing. (If he were actually an ant, he’d be the warrior and the drone and the queen and everyone else too.) This novel will remind people of all his gifts and introduce them to some new ones!
— Bill McKibben, author of Radio Free Vermont