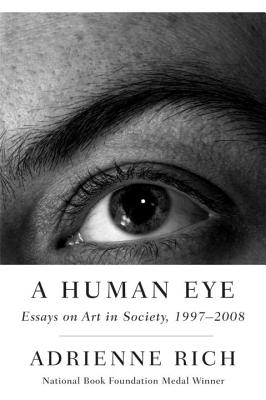 “Adrienne Rich is the Blake of American letters.”—Nadine Gordimer

Across more than three decades Adrienne Rich’s essays have been praised for their lucidity, courage, and range of concerns. In A Human Eye, Rich examines a diverse selection of writings and their place in past and present social disorders and transformations. Beyond literary theories, she explores from many angles how the arts of language have acted on and been shaped by their creators’ worlds.

Widely read, widely anthologized, widely interviewed, and widely taught, Adrienne Rich (1929–2012) was for decades among the most influential writers of the feminist movement and one of the best-known American public intellectuals. She wrote two dozen volumes of poetry and more than a half-dozen of prose. Her constellation of honors includes two National Book Awards, a MacArthur Foundation “genius” grant, and a Medal for Distinguished Contribution to American Letters by the National Book Foundation. Ms. Rich’s volumes of poetry include The Dream of a Common Language, A Wild Patience Has Taken Me This Far, An Atlas of the Difficult World, The School Among the Ruins, and Telephone Ringing in the Labyrinth. Her prose includes the essay collections On Lies, Secrets, and Silence; Blood, Bread, and Poetry; an influential essay, “Compulsory Heterosexuality and Lesbian Existence,” and the nonfiction book Of Woman Born, which examines the institution of motherhood as a socio-historic construct. In 2010, she was honored with The Griffin Trust for Excellence in Poetry's Lifetime Recognition Award.