All the Daring of the Soldier: Women of the Civil War Armies (Paperback) 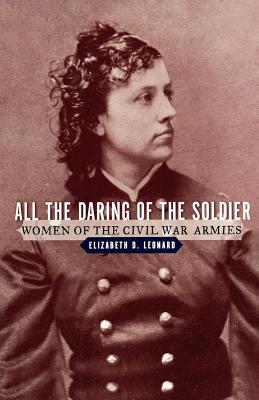 The fascinating stories of the women who worked as spies, as daughters of the regiments, or who disguised themselves as male soldiers to play their heroic part in the Civil War.

Historian Elizabeth Leonard has combed archives, memoirs, and histories to unearth the stories of the hidden and forgotten women who risked their lives for the blue or the gray. These women spied for their cause, remained on the front lines as daughters of the regiments, and even dressed as men and enlisted under aliases to take up arms and fight as soldiers. Here are the stories of Belle Boyd, a proud Confederate loyalist and key player in Stonewall Jackson's struggle to hold the Shenandoah Valley; army woman Annie Etheridge, whose four long years of courageous work on the field earned her a Kearney Cross for bravery; Sarah Emma Edmonds, who enlisted as "Franklin Thompson," remained with her regiment as a much-respected soldier for two years, fighting at Fredricksburg and elsewhere; and many other courageous women.

Leonard investigates why these women chose unconventional ways to help their cause. In doing so, she gives us a striking portrait of the lives women led in the nineteenth century and of their ability to break through the traditional barriers of Victorian womanhood.

Elizabeth D. Leonard is the John J. and Cornelia V. Gibson Professor of History at Colby College. The author of several books, including Yankee Women, All the Daring of a Soldier, Lincoln’s Avengers, and Men of Color to Arms!, she lives in Waterville, Maine.