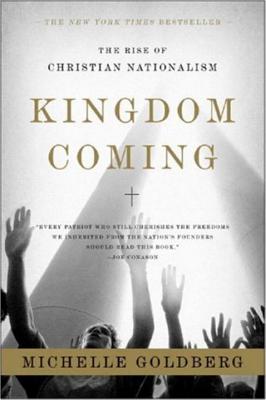 "A potent wakeup call to pluralists in the coming showdown with Christian nationalists."—Publishers Weekly, starred review

Michelle Goldberg, a senior political reporter for Salon.com, has been covering the intersection of politics and ideology for years. Before the 2004 election, and during the ensuing months when many Americans were trying to understand how an administration marked by cronyism, disregard for the national budget, and poorly disguised self-interest had been reinstated, Goldberg traveled through the heartland of a country in the grips of a fevered religious radicalism: the America of our time. From the classroom to the mega-church to the federal court, she saw how the growing influence of dominionism-the doctrine that Christians have the right to rule nonbelievers-is threatening the foundations of democracy.

In Kingdom Coming, Goldberg demonstrates how an increasingly bellicose fundamentalism is gaining traction throughout our national life, taking us on a tour of the parallel right-wing evangelical culture that is buoyed by Republican political patronage. Deep within the red zones of a divided America, we meet military retirees pledging to seize the nation in Christ's name, perfidious congressmen courting the confidence of neo-confederates and proponents of theocracy, and leaders of federally funded programs offering Jesus as the solution to the country's social problems.

With her trenchant interviews and the telling testimonies of the people behind this movement, Goldberg gains access into the hearts and minds of citizens who are striving to remake the secular Republic bequeathed by our founders into a Christian nation run according to their interpretation of scripture. In her examination of the ever-widening divide between believers and nonbelievers, Goldberg illustrates the subversive effect of this conservative stranglehold nationwide. In an age when faith rather than reason is heralded and the values of the Enlightenment are threatened by a mystical nationalism claiming divine sanction, Kingdom Coming brings us face to face with the irrational forces that are remaking much of America.

Michelle Goldberg is a contributing editor at Religion Dispatches and a senior correspondent for American Prospect. Her work has appeared in Rolling Stone, the New York Observer, the Guardian [London], Newsday, and elsewhere. She lives in Brooklyn, New York.

Goldberg's book will be recognized as the definitive guide to how a relatively tiny group of intellectuals, politicians, and conservatives religionists positioned themselves to take over America. This stuff is no joke.
— Tony Normal - Pittsburgh Post-Gazette

Regardless of where you fall on the moderate-to-progressive political scale, this well-written chronicle of civil liberties under siege by holy rollers will undoubtedly scare the bejesus out of you.
— David Fear - Time Out