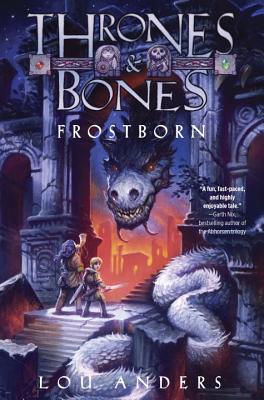 Fantasy fans of Rick Riordan's Percy Jackson and John Flanagan's Ranger's Apprentice series will embrace this first novel in an adventure-filled, Viking-inspired series by a debut author.
Meet Karn. He is destined to take over the family farm in Norrongard. His only problem? He d rather be playing the board game Thrones and Bones.
Enter Thianna. Half human, half frost giantess. She's too tall to blend in with other humans but too short to be taken seriously as a giant.
When family intrigues force Karn and Thianna to flee into the wilderness, they have to keep their sense of humor and their wits about them. But survival can be challenging when you re being chased by a 1,500-year-old dragon, Helltoppr the undead warrior and his undead minions, an evil uncle, wyverns, and an assortment of trolls and giants.
Readers will embark on a sweeping epic fantasy as they join Karn and Thianna on a voyage of discovery. Antics and hair-raising escapades abound in this fantasy adventure as the two forge a friendship and journey to unknown territory. Their plan: to save their families from harm.
Debut novelist Lou Anders has created a rich world of over twenty-five countries inhabited by Karn, Thianna, and an array of fantastical creatures, as well as the Thrones and Bones board game.

Praise for Frostborn
"Future fans of Tolkien and George R.R. Martin can happily cut their serial-fantasy teeth on this first book of an eventual series." -Kirkus Reviews

"A fun, fast-paced, and highly enjoyable tale." -Garth Nix, bestselling author of the Abhorsen trilogy
*..".a powerful, fast-paced tale... The setting is rich, the characters well-defined, and the danger ever-paramount." -Publishers Weekly, starred

..".an excellent choice for readers new to the genre. The themes of staying true to oneself, teamwork, and individuality will resonate with readers." -School Library Journal

..".this accessible fantasy brings together two very different children bound by common goals." -Booklist
"The most delightful fantasy I have read in ages. . . . Put me on the waiting list for book 2 " -Amy Plum, international bestselling author of the Die For Me series.

Lou Anders s research on Norse mythology while writing Frostborn turned into a love affair with Viking culture and a first visit to Norway. He hopes the series will appeal to boys and girls equally. Anders is the recipient of a Hugo Award for editing and a Chesley Award for art direction. He has published over 500 articles and stories on science fiction and fantasy television and literature. A prolific speaker, Anders regularly attends writing conventions around the country. He and his family reside in Birmingham, Alabama. You can visit Anders online at louanders.com and ThronesandBones.com, on Facebook, and on Twitter at @ThronesandBones."