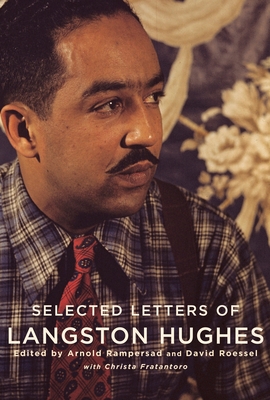 This is the first comprehensive selection from the correspondence of the iconic and beloved Langston Hughes. It offers a life in letters that showcases his many struggles as well as his memorable achievements. Arranged by decade and linked by expert commentary, the volume guides us through Hughes’s journey in all its aspects: personal, political, practical, and—above all—literary. His letters range from those written to family members, notably his father (who opposed Langston’s literary ambitions), and to friends, fellow artists, critics, and readers who sought him out by mail. These figures include personalities such as Carl Van Vechten, Blanche Knopf, Zora Neale Hurston, Arna Bontemps, Vachel Lindsay, Ezra Pound, Richard Wright, Kurt Weill, Carl Sandburg, Gwendolyn Brooks, James Baldwin, Martin Luther King, Jr., Alice Walker, Amiri Baraka, and Muhammad Ali. The letters tell the story of a determined poet precociously finding his mature voice; struggling to realize his literary goals in an environment generally hostile to blacks; reaching out bravely to the young and challenging them to aspire beyond the bonds of segregation; using his artistic prestige to serve the disenfranchised and the cause of social justice; irrepressibly laughing at the world despite its quirks and humiliations. Venturing bravely on what he called the “big sea” of life, Hughes made his way forward always aware that his only hope of self-fulfillment and a sense of personal integrity lay in diligently pursuing his literary vocation. Hughes’s voice in these pages, enhanced by photographs and quotations from his poetry, allows us to know him intimately and gives us an unusually rich picture of this generous, visionary, gratifyingly good man who was also a genius of modern American letters.

ARNOLD RAMPERSAD, the Sarah Hart Kimball Professor Emeritus in the Humanities at Stanford University, has also taught at Princeton, Columbia, and Rutgers Universities. His books include The Life of Langston Hughes (two volumes); biographies of W. E. B. Du Bois, Jackie Robinson, and Ralph Ellison; and, with Arthur Ashe, Days of Grace: A Memoir. Among his numerous awards and honors are a MacArthur Foundation fellowship in 1991 and the National Humanities Medal, presented at the White House in 2011.

DAVID ROESSEL is the Peter and Stella Yiannos Professor of Greek Language and Literature at the Richard Stockton College of New Jersey. He is the associate editor, with Arnold Rampersad, of The Collected Poems of Langston Hughes, as well as the coeditor of The Collected Poems of Tennessee Williams and Mister Paradise and Other One-Act Plays by Tennessee Williams. His book In Byron’s Shadow: Modern Greece in the English and American Imagination was awarded the annual MLA Prize for Independent Scholars.

CHRISTA FRATANTORO is a senior editor with F. A. Davis Company, a health care publisher based in Philadelphia. She studied literature at the Richard Stockton College of New Jersey. An independent scholar with an interest in Hughes, she welcomed the opportunity to work on Selected Letters.

“Langston Hughes is a titanic figure in 20th-century American literature . . . a powerful interpreter of the American experience.” —The Philadelphia Inquirer