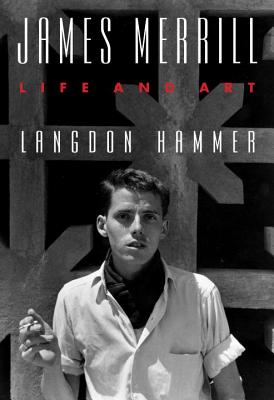 By Langdon Hammer
$40.00
Special Order from the publisher

Langdon Hammer has given us the first biography of the poet James Merrill (1926–95), whose life is surely one of the most fascinating in American literature. Merrill was born to high privilege and high expectations as the son of Charles Merrill, the charismatic cofounder of the brokerage firm Merrill Lynch, and Hellen Ingram, a muse, ally, and antagonist throughout her son’s life. Wounded by his parents’ bitter divorce, he was the child of a broken home, looking for repair in poetry and love. This is the story of a young man escaping, yet also reenacting, the energies and obsessions of those powerful parents. It is the story of a gay man inventing his identity against the grain of American society during the eras of the closet, gay liberation, and AIDS. Above all, it is the story of a brilliantly gifted, fiercely dedicated poet working every day to turn his life into art.

After college at Amherst and a period of adventure in Europe, Merrill returned to the New York art world of the 1950s (he was friendly with W. H. Auden, Maya Deren, Truman Capote, Larry Rivers, Elizabeth Bishop, and other midcentury luminaries) and began publishing poems, plays, and novels. In 1953, he fell in love with an aspiring writer, David Jackson. They explored “boys and bars” as they made their life together in Connecticut and later in Greece and Key West. At the same time, improbably, they carried on a forty-year conversation with spirits of the Other World by means of a Ouija board. The board became a source of poetic inspiration for Merrill, culminating in his prizewinning, uncanny, one-of-a-kind work The Changing Light at Sandover. In his virtuosic poetry and in the candid letters and diaries that enrich every page of this deliciously readable life, Merrill created a prismatic art of multiple perspectives and comic self-knowledge, expressing hope for a world threatened by nuclear war and environmental catastrophe. Holding this life and art together in a complex, evolving whole, Hammer illuminates Merrill's “chronicles of love & loss” and the poignant personal journey they record.

LANGDON HAMMER is professor of English and American Studies and chair of the English Department at Yale University. His books include Hart Crane & Allen Tate: Janus-Faced Modernism and, as editor for the Library of America, Hart Crane: Complete Poetry and Selected Letters and May Swenson: Collected Poems. A former Guggenheim fellow and fellow at the Leon Levy Center for Biography at the Graduate Center of the City University of New York, he has written about poetry for the Los Angeles Times, New York Times Book Review, and The American Scholar, where he is poetry editor. His lectures on modern poetry are available free online at Yale Open Courses.

"A gorgeously written and elegantly comprehensive study of the tumult and passion of Merrill’s Life and Art."--The Economist

"[Hammer] sums up people and milieus with strong, deft strokes. The historian and the critic in him are in elegant synchronicity. He goes to work on Merrill’s outsize life like a master fishmonger carving a bluefin tuna. Every cut is measured. Nothing is wasted. The best and fattiest bits – the poetry, in this case – are reserved, like sashimi, for special use."--Dwight Garner, The New York Times

"By a wide margin the largest, most detailed, and most convincingly atmospheric biography ever written about Merrill – it has all the rhetorical and bibliographical flavor of a durable landmark. It’s considerably helped along toward that goal by Hammer’s lively storytelling style. . . James Merrill: Life and Art is a brilliantly marshaled biography of a surprisingly elusive subject."--Steve Donoghue, Open Letters Monthly

“Langdon Hammer’s richly textured biography of James Merrill’s life and art, which are so inextricably intertwined, is a work of great candor, insight, and sympathetic imagination.  It is a magisterial achievement.”––Edward Hirsch

“This is an overwhelming book.  Very few writers have been as intimately portrayed--or had their work as illuminatingly read--as James Merrill in Langdon Hammer's prodigious biography. His empathetic yet clear-eyed account shows how Merrill's exquisite "feeling for the word" merged with his lust for living in an idiosyncratic artistic heroism that produced some of the great lyric poetry of the late twentieth century.”
––Jonathan Galassi

“Fabulously wealthy, gay, prodigiously gifted, Merrill emerges in this stunningly capacious and moving biography in his full complexities: a generous man who thought himself cold; a Jamesian sensibility flinging himself upon the thorns of life; a meticulous formalist who submitted to the occult; a man who hid his HIV-positive status but became, one now sees, one of the major poets of the AIDS crisis. Merrill has found in Langdon Hammer a biographer of enormous discernment, grace and style: it is all here, indefatigably researched, delicately sifted, astutely judged, beautifully written.”––Maureen N. McLane

“Discovering James Merrill's profound masterwork, "The Changing Light at Sandover," just as AIDS was beginning to alter the way we lived then and now saved many a soul. His portrait of gay domesticity that rarely noticed its own difference not only challenged the idea of "queerness" in literature, but in the world. Langdon Hammer's epic study of an epic mind is essential not only to our understanding of the prolific poet, but to the art of biography. Beautifully written and reasoned, Hammer's book possesses all the qualities Merrill prized in his own work, and life: humor, narrative energy, acute observation and analysis that is profound because it is true.”––Hilton Als

“Meticulously researched, Langdon Hammer's James Merrill chronicles the life of a poet who believed nothing is lost-- and whose poetry of personal experience, sifted by sensibility, is a poetry of mirror and mask, flesh and spirit, disclosure and secrecy. Most of all, it's a poetry, and a life, crafted from the sublime and the elemental, brilliantly mixed, which Hammer interprets with tender insight and wise sympathy.”––Brenda Wineapple