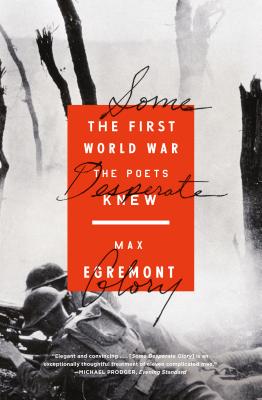 The story of World War I, through the lives and words of its poets

The hundredth anniversary of the outbreak of what many believed would be the war to end all wars is in 2014. And while World War I devastated Europe, it inspired profound poetry—words in which the atmosphere and landscape of battle are evoked perhaps more vividly than anywhere else.
The poets—many of whom were killed—show not only the war's tragedy but also the hopes and disappointments of a generation of men. In Some Desperate Glory, the historian and biographer Max Egremont gives us a transfiguring look at the life and work of this assemblage of poets. Wilfred Owen with his flaring genius; the intense, compassionate Siegfried Sassoon; the composer Ivor Gurney; Robert Graves, who would later spurn his war poems; the nature-loving Edward Thomas; the glamorous Fabian Socialist Rupert Brooke; and the shell-shocked Robert Nichols—all fought in the war, and their poetry is a bold act of creativity in the face of unprecedented destruction.
Some Desperate Glory includes a chronological anthology of the poets' works, telling the story of the war not only through the lives of these writers but also through their art. This unique volume unites the poetry and the history of the war—so often treated separately—granting readers the pride, strife, and sorrow of the individual soldier's experience coupled with a panoramic view of the war's toll on an entire nation.

Max Egremont was born in 1948 and studied modern history at Oxford University. He is the author of four novels and four biographies, including Siegfried Sassoon: A Life (FSG, 2005) and Forgotten Land: Journeys Among the Ghosts of East Prussia (FSG, 2011). Egremont is a Fellow of the Royal Society of Literature.

“Haunting and beautiful, the work of poets such as Robert Graves, Siegfried Sassoon and Wilfred Owen continues to fascinate almost 100 years after the war began. . . In his new book, Some Desperate Glory, historian Max Egremont tells the stories of these half-forgotten poets.” —Ruth Styles, The Daily Mail (UK)

“Elegant and convincing . . . Egremont's [Some Desperate Glory] is an exceptionally thoughtful treatment of 11 complicated men. He lets poignant vignettes take the place of familiar descriptions of the trenches' horrors--from Thomas, on his last night of home leave before his death, tenderly carrying his wife upstairs to bed wrapped in his greatcoat and whispering to her 'all is well between us for ever and ever" to Owen's keen distress as the 'universal perversion of Ugliness' that somehow intensified the death he was surrounded by. Above all, Egremont reminds the reader that the poems record not one amorphous war but 11 individual conflicts.” —Michael Prodger, Evening Standard

“This is not simply another anthology of the ‘best' poetry of the Great War, though, but an attempt to tell the story of the war through its poets and explore their development through the impact of the conflict on their writing. . . Some Desperate Glory carries a punch . . . . both [Egremont's] choices and the strict chronology that he imposes on them make certain things strike home with a new freshness.” —David Crane, The Spectator (London)

“Egremont's . . . beautifully written volume makes an ideal guide to this shifting, shadowy realm . . . On visiting Kaliningrad in the 1960s, the poet Joseph Brodsky wrote that the trees ‘whisper in German.' They don't anymore. But Egremont heard their last words.” —Andrew Stuttaford, The Wall Street Journal on Forgotten Land