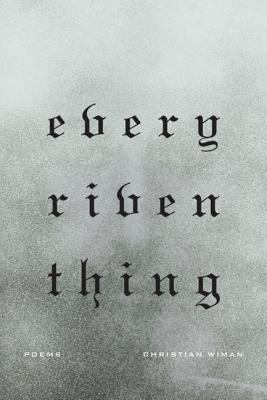 Every Riven Thing is Christian Wiman's first collection in seven years, and rarely has a book of poetry so borne the stamp of necessity. Whether in stark, haiku-like descriptions of a cancer ward, surrealistic depictions of a social order coming apart, or fluent, defiant outpourings of praise, Wiman pushes his language and forms until they break open, revealing startling new truths within. The poems are joyful and sorrowful at the same time, abrasive and beautiful, densely physical and credibly mystical. They attest to the human hunger to feel existence, even at its most harrowing, and the power of art to make our most intense experiences not only apprehensible but transfiguring.

Christian Wiman is the author of several books, including the memoirs My Bright Abyss: Meditation of a Modern Believer (FSG, 2013) and He Held Radical Light: The Art of Faith, the Faith of Art (FSG, 2018); Every Riven Thing (FSG, 2010), winner of the Ambassador Book Award in poetry; Once in the West (FSG, 2014), a National Book Critics Circle Award finalist in poetry; and Stolen Air: Selected Poems of Osip Mandelstam. He teaches religion and literature at the Yale Institute of Sacred Music and Yale Divinity School.

“Wiman attains intensity often enough to remind you of just how great Frost was, and often there is a touch of another of his masters, Richard Wilbur . . . But the best thing to say about Wiman is not that he reminds you of previous poets: It's that he makes you forget them.” —Clive James, The Financial Times

“One of the best books of poetry written in the past twenty years. It is extraordinary.” —John Poch

“Every poem seems made to steady and fortify him against mortality.” —Dan Chiasson, The New Yorker (one of the ten best books of 2010)

“One of the preeminent devotional poets of any faith now writing in English.” —David J. Rothman, First Things

“An ecstatic ruckus worthy of Gerard Manley Hopkins, who also tasted the tears in things--and the holy too.” —Dana Jennings, The New York Times

“Wiman has found in Every Riven Thing his true voice, alternately edgy and relaxed, taut and unfettered. There's fear and grief, to be sure, but also consolation and humor.” —Kevin Nance, Poets & Writers

“The work here is searingly honest and beautifully crafted, and it establishes Wiman in his most important public role: a gifted poet whose work cannot be ignored.” —Elizabeth Lund, The Christian Science Monitor

“This is haunting stuff--this is language turned and tuned to a pitch where it is both quiet scream and humble song.” —Brian Doyle, The Christian Century

“Few poets have been able to pull off contemplative/metaphysical poetry in the 20th and 21st centuries. Our detached sensibilities make that level of immersion feel overly forced. It can come off as both too submerged and too transcendent. We'd rather float. But Wiman makes a case for going old school. He dives right in to sentiment but swims up with hardly a drop of sentimentality. He asks for belief but never sounds fatuous. We are a god hungry nation. Politicians know it, and it just might be time for poets to know it. Wiman, in this case, is ahead of the curve.” —Dean Rader, The Rumpus

“Christian Wiman is fiercely dedicated to describing experiences for which there are no words--an ambition shared with many poets today. But few contemporary poets invite us to consider new ways of looking at those experiences as openly, intensely, and originally as he does.” —Mike Puican, TriQuarterly

“Wiman . . . writes with the gravity, awe, and humility of one who has been riven but lived to tell the tale, as well as ask the questions and pray the prayers that follow the experience of being broken . . . [His] use of violent imagery is reminiscent of Donne, while his reverence and musicality echo Hopkins, but the voice is his own.” —Image Update

“Christian Wiman, the visionary editor of Poetry magazine, has written a book so urgent that the poems feel carved into the skin. Looming large over Every Riven Thing is Wiman's diagnosis with a rare form of cancer, but Wiman never slips into keening or self-dramatization; neither does he let the prospect of his death hurry his prosody. Instead, quite miraculously, he uses his considerable craft -- measured, assured, but never belaboured -- to slow what little time he may have left, and savour it in language as lush and full of pathos as one is likely to encounter in contemporary verse. He writes: ‘To love is to feel your death / given to you like a sentence, / to meet the judge's eyes / as if there were a judge, / as if he had eyes / and love." In doing so he reminds us that serious craft has an ethical, as well as aesthetic, quality to it.” —Michael Lista, National Post

“I think you should go read this book, right now, and throw yourself into its brutal, beautiful simplicity . . . Wiman's poems speak of a survival, and a hope, that is neither bleak nor sentimental, but real and good and true. Praise to that, and to Wiman's reverence, which only has the power to assist our own.” —Allison Backous, Comment

“His is a world of acute insight into the human questions--of mortality, of God, of nature--rendered without proselytizing, without prognosis. He just observes, and still questions. He's as at home on the trains of the city as he is on the range of his native West Texas. He believes in God, yet leads us into the existential void, into the terror of the terminal soul. His illness sharpens his vision; his words are radiated. And yet, he's funny, using humor to disarm the darkness that lies within reach of his questions.” —Brian Hieggelke, Newcity

“Christian Wiman . . . writes poems that are a study in torque, full of twisting force, words and lines pushing and pulling each other into forms of astonishing solidity and grace. His third collection, Every Riven Thing, is a beautiful and wrenching dialogue with death, decay, and the divine and is one of the best books of poems published last year.” —Jill Owens, PowellsBooks.Blog