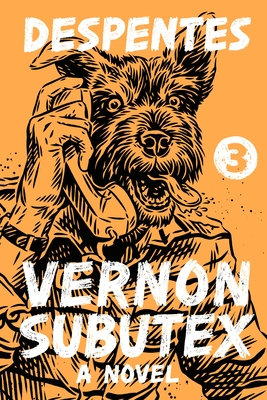 This is book number 3 in the Vernon Subutex series.

Paris may burn, the world may crumble, but Vernon Subutex shall reign supreme! —The final installment of writer/filmmaker Virginie Despentes’s Man Booker International Prize shortlisted punk-rock trilogy. The basis for the TV series of the same name available on streaming.

As storm clouds gather, portending a final reckoning, ersatz rave-cult leader Vernon Subutex decides to return to Paris. Even if it means leaving behind his disciples. He has to. He’s got a dentist’s appointment.

Back in the city, he learns that an old friend from his days homeless on the Paris streets has died and left him half of a lottery win. But when Vernon returns to his commune with news of this windfall, it’s not long before his disciples turn on each other. Such good fortune does not accord with the principles Vernon has handed down.

Meanwhile, the monstrous film producer Laurent Dopalet is determined to make Aïcha and Céleste pay for their attack on him, whatever it takes and whoever gets hurt. And, before long, the whole of Paris will be reeling in the wake of the terrorist atrocities of 2015 and 2016, and all the characters in this kaleidoscopic portrait of a city and era will be forced to confront one another one last time. In the wake of all this chaos and hate, the question will rise again: After all he’s been through, who is Vernon Subutex? And the answer: He is the future.

Virginie Despentes’s epochal trilogy ends with Vernon Subutex 3—in fire, blood, and even forgiveness. But not everyone will survive to see the dawning of the golden age of Subutex.

Frank Wynne has translated the work of numerous French and Hispanic authors, including Michel Houellebecq, Patrick Modiano, Javier Cercas, and Virginie Despentes. His work has earned him many prizes, including the Scott Moncrieff Prize, the Premio Valle Inclán, and the IMPAC Dublin Literary Award with Houellebecq for The Elementary Particles. Most recently, his translation of Jean-Baptiste Del Amo’s Animalia won the 2020 Republic of Consciousness Prize.

"Either you’re already onboard with this series and need no convincing, or you’ve somehow missed the fact that a cool French writer has been pumping out hilarious and corrosive novels about contemporary urban life at the center and fringes of Paris. Despentes writes like Armistead Maupin, but about aging Gen-Xers instead of hippies and New Agers."
—Molly Young, Vulture (46 Books We Can't Wait to Read in 2021)

"Despentes has been described as the "Rock'n'roll (insert name of any 19th century novelist you care to think of)". True, she is in some sense an "apostle of the gutter" like Zola. And, like Balzac, she can present a panorama of individuals shaped by socioeconomic circumstance."
—Wendy Erksine, Irish Times

"Vernon Subutex is written as if to act not as literature exactly, in its typical arena, but rather head-to-head with the dominant culture . . . That logic of multiplication and diversity, the scale and the frenzy of invention in this trilogy, and Despentes’s own larger-than-life resourcefulness all have an aspect of horror, suggesting in their negative the vastness and intractability of the power in her sights."
—Jacqueline Feldman, The Nation

"Vernon is a discombobulated ball of thread—post-analog, post-Sarkozy, post-consumption, post-ambiguity, set to an incredible playlist of underground rock, punk, and fusion chiefly spun by its title character, a sort of average dude turned unlikely guru. Despentes imparts an honesty, a unilateral autonomy baked into every character (there’s a couple dozen), told through a fractal and tender, learned human lens. The series flat out rules—it’s so god damned enjoyable."
—Matthew Bedard, Flaunt

"The long, wild ride of France’s most unlikely lothario reaches its lurid climax . . . [an] absorbing saga about the evolution of the dispossessed."
—Publishers Weekly

"Setting her novel around the Charlie Hebdo shooting and the Bataclan attack, Despentes probes a city in fear: of change, of violence, of stagnancy. Radicals and reactionaries, the secular and the hyper-religious, racists, misogynists and feminists scorn modern-day society, but remain split on how to patch it up . . . Despentes's talent is her ability to examine the world as it is--the violence, the ugliness, the blights--without losing a certain wicked humor."
—Simone Woronoff, Shelf Awareness (starred review)

"As raw and rewarding as readers of the first two installments would expect."
—The New European (5 Great Books Published This Month)

"The last volume of Virginie Despentes’ acclaimed trilogy has arrived and, as you would expect, there’s considerably more bang than whimper . . . outrageous, often funny and frequently foul-mouthed . . . Vernon Subutex 1, 2 and 3 are Despentes’ fearless, dissection of contemporary France through a chorus of extraordinary, extreme voices . . . Just don’t expect Despentes to give you a happily ever after."
—Siobhan Murphy, The Times

"A pulpy thriller narrative built around the notion that rampant free-market values have left a moral and spiritual void at the centre of French society . . . Imagine, if you will, James Ellroy and William Gibson rewriting High Fidelity and you’re somewhere near the tone . . . There’s a sense of mischief throughout, as if Despentes is gleefully spinning the wheel in tracing these stories."
—The Observer

"Despentes has found a way, at the level of composition and form, to enhance and even embody the qualities - hatred, alienation, anarchy of feeling - that she identifies at the centre of present-day France . . . Despentes's writing is intelligent, outspoken, witty, shocking, propulsive and streetwise. She has a clenched-fist tremendismo style that fits perfectly with her thrash metal image (she is frequently pictured in a Motorhead T-shirt)."
—Hal Jensen, The Times Literary Supplement