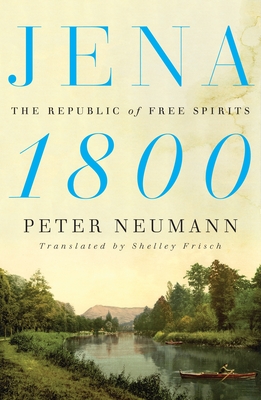 “An exhilarating account of a remarkable historical moment, in which characters known to many of us as immutable icons are rendered as vital, passionate, fallible beings . . . Lively, precise, and accessible.” —Claire Messud, Harper’s

Around the turn of the nineteenth century, a steady stream of young German poets and thinkers coursed to the town of Jena to make history. The French Revolution and the Napoleonic Wars had dealt a one-two punch to the dynastic system. Confidence in traditional social, political, and religious norms had been replaced by a profound uncertainty that was as terrifying for some as it was exhilarating for others. Nowhere was the excitement more palpable than among the extraordinary group of poets, philosophers, translators, and socialites who gathered in this Thuringian village of just four thousand residents.

Jena became the place for the young and intellectually curious, the site of a new departure, of philosophical disruption. Influenced by Johann Wolfgang von Goethe, then an elder statesman and artistic eminence, the leading figures among the disruptors—the translator August Wilhelm Schlegel; the philosophers Friedrich "Fritz" Schlegel and Friedrich Schelling; the dazzling, controversial intellectual Caroline Schlegel, married to August; Dorothea Schlegel, a poet and translator, married to Fritz; and the poets Ludwig Tieck and Novalis—resolved to rethink the world, to establish a republic of free spirits. They didn’t just question inherited societal traditions; with their provocative views of the individual and of nature, they revolutionized our understanding of freedom and reality.

With wit and elegance, Peter Neumann brings this remarkable circle of friends and rivals to life in Jena 1800, a work of intellectual history that is colorful and passionate, informative and intimate—as fresh and full of surprises as its subjects.

Peter Neumann studied philosophy, political science, and economics in Jena and Copenhagen. He holds a PhD in philosophy and writes for the weekly newspaper Die Zeit. He is the author of the poetry collections secure and areas & days, which have been awarded several prizes and scholarships.

"The success of Jena 1800 relies on its kaleidoscopic narrative style. The doctrines of the Idealists and the effusions of the Romantics are not neatly summarized as if in retrospect. Instead they spill out in real time, amid the personal triumphs and tragedies of their authors . . . An evocative account of a rich episode in Europe’s cultural history." —Jeffrey Collins, The Wall Street Journal

“Admirably translated by Shelley Frisch . . . [Jena 1800 is] an exhilarating account of a remarkable historical moment, in which characters known to many of us as immutable icons are rendered as vital, passionate, fallible beings . . . Neumann, in drawing his subjects, selects marvelous vivifying details . . . In lively, precise, and accessible short chapters, the book conveys both the earnest intensity of those heady days and the entropic forces that swiftly brought them to a close.” —Claire Messud, Harper’s

"[A] vivid group biography . . . Neumann is adept both at conveying the gossip, feuds, and eccentricities of this tight-knit milieu and at grappling with his subjects’ political and philosophical ideas, which were crucial to the development of German Romanticism." —The New Yorker

"Peter Neumann beautifully captures the special moment when, guided by Goethe and inspired by Kant, the young philosophers Fichte, Hegel and Schelling, poets Schiller and Novalis, brothers Fritz and Wilhelm Schlegel and their wives Dorothea and Caroline all lived in the same small university town, Jena, at the same time, and tried to remake the world . . . With a sweeping style, [Neumann] charmingly animates the atmosphere of Jena." —Randy Rosenthal, Star Tribune

"Peter Neumann recreates the heady environment in flowing, literate prose . . . [The story] will pull readers along through their discussions of nature, humanity and new worlds to come." —David Luhrssen, Shepherd Express

“Engaging . . . [Jena 1800] has an exuberant tone, suggesting that Jena was hosting a grown-up play group of collaborators, questioners, and creators . . . Neumann has written a compelling tale that focuses on the tumultuous concatenation of a number of imaginative and dynamic thinkers.” —Thomas Filbin, The Arts Fuse

"In lucid and colorful vignettes, Neumann brings to life an industrious and clever clique . . . One doesn't need a philosophy degree to enjoy this enchanting account of the power of ideas to change the world." —Peggy Kurkowski, Shelf Awareness

“When it comes to German literature and culture at the turn of the nineteenth century, Goethe tends to take centre stage for anglophone readers. In Jena 1800, Peter Neumann addresses that imbalance . . . Walking freely into the minds of his characters, Neumann takes us through this shift in a series of scenes in which the group’s members attempt to control or steer their careers, their love affairs and other relationships . . . In Shelley Frisch’s admirable translation we see Fichte enjoying his evening wine and milk bun.” —Elizabeth Powers, The Times Literary Supplement

“[Jena 1800] tells the story of the lives lived by the prominent Jena Romantics and how they intersected with each other and embodied the free spirit of play that had captivated revolutionary politics before turning to the horror of The Terror . . . Now is a great time for an exposé into the adventurous lives of the Jena Romantics because we too are living in the throes of uncertainty, the death of the post-1945 order and the remaking of the world.” —Paul Krause, VoegelinView

"Neumann succeeds in capturing the heady atmosphere of this place and time. This invigorating aperitif will whet readers’ appetites for diving into the deep end of 18th- and 19th-century German philosophy." —Publishers Weekly

"Philosophers and poets congregate in a university town, kindling both interpersonal intrigues and revolutionary ideas about freedom and self-understanding that would influence European thought for decades . . . Neumann adeptly narrates the philosophical advances that quickened in this heady environment . . . The result is a quirky, fleet-footed intellectual history that foregrounds the human beings behind the ideas." —Brendan Driscoll, Booklist

"Peter Neumann has taken a rich and important episode in intellectual history—the rise of German idealism at the turn of the nineteenth century—and created a fascinating and highly readable story of ideas, art, love and war. With a cast that includes Goethe, Fichte, Hegel, Hölderlin, Schiller, and Madame de Staël (and cameos by Spinoza and Kant), he shows why this small Prussian village in a revolutionary era deserves to be included in any account of modernity." —Steven Nadler, author of Think Least of Death: Spinoza on How to Live and How to Die

"This delightfully eccentric book breathes new life into the revolutionary ideas birthed in turn-of-the-century Jena. Peter Neumann has channeled the experimental spirit of his Romantic subjects to create an ingenious fusion of philosophy and art, imaginative biography and intellectual history. Crammed with illuminating insights—and irresistible gossip—Jena 1800 transports readers to a world intoxicated with the possibilities of thought." —Clare Carlisle, author of Philosopher of the Heart: The Restless Life of Søren Kierkegaard

"This is the way the history of ideas ought to be written: it's colorful and clever. A wonderful pleasure to read." —Wolfram Eilenberger, author of Time of the Magicians: Wittgenstein, Benjamin, Cassirer, Heidegger, and the Decade That Reinvented Philosophy

"With light, fast-paced clarity, Jena 1800 depicts the intertwined social and intellectual life of German Romantics. One of the most important and complicated moments in German intellectual history comes to life in quick, bold passages. Written in a Romantic style as a series of short scenes that build up into a full history, Peter Neumann demonstrates his nuanced understanding of the Romantic fragment and German Idealism. He shows how philosophical systems emerge from personal relations, and how both stand in shock before Napoleon’s army. Shelley Frisch’s translation never falters, always fast and smooth, never resorting to clunky Germanisms. The story commences with war and love, but then, most subtly, the reader is led up into the supple distinctions of systematic Idealism. Frisch’s translation lets the reader feel the romance of philosophical insight." —Daniel Purdy, Professor of German, Penn State University

"Jena 1800 offers a lively, impassioned, and entertaining telling of the lives and ideas of a group of distinguished and up-and-coming German philosophers, poets, and intellectuals living in (or nearby) the college town of Jena at the turn of the eighteenth century. Peter Neumann provides a refreshing take on the period by refusing to separate the personal from the philosophical, and his achievement is to do so with vivid and poetic prose (thanks, in part, to Shelley Frisch’s excellent translation), an eye for detail, and a dedication to making the historical context, ideas, politics, and personal lives of these German thinkers highly accessible to all readers." —Gabriel Gottlieb, Associate Professor of Philosophy, Xavier University