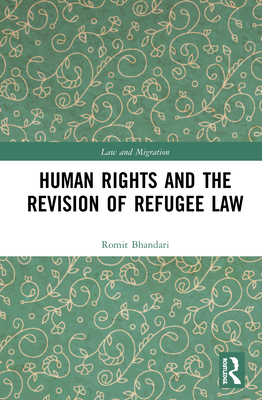 This book addresses the relationship between International Refugee Law and International Human Rights Law. Using international refugee law's analytical turn to human rights as its object of inquiry, it represents a critical intervention into the revisionism that has led to conceptual fragmentation and restrictive practices.

Mainstream literature in refugee law reflects a mood of celebration, a narrative of progress which praises the discipline's rescue from obsolescence. This is commonly ascribed to its repositioning alongside human rights law, its veritable rediscovery as an arm of this far greater edifice. By using human rights logic to construct the current legal paradigm and inform us of who qualifies as a refugee, this purportedly lent areas of conceptual uncertainty a set of objective, modern criteria and increased enfranchisement to new, non-traditional claimants.

The present work challenges this dominant position by finding the untold limits of its current paradigm. It stands alone in this orientation and hereby represents one of the most comprehensive, heterodox and structurally detailed reviews of this connection. The exploration of the gap between modern approaches and the unsatisfactory realities of seeking asylum forms the substance of this book. It asserts, by contrast, the existence of revolution rather than evolution. Human rights law has erased the founding tenets of the Refugee Convention, enabling powerful states to contain refugees in their region of origin.

The book will be essential reading for those interested in Refugee Law, Refugee Studies, Postcolonial Legal Studies, Postmodern Critiques and Critical Legal Theory. Additionally, given its relevance for the adjudication of refugee claims, it will be an important resource for solicitors, barristers and judges.

Romit Bhandari is a lecturer in the Law School at the University of Essex, UK.