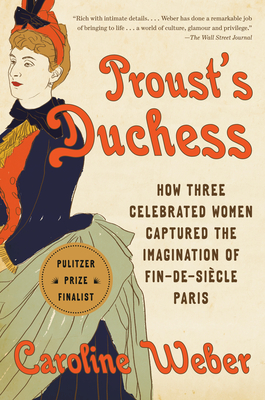 From the author of the acclaimed Queen of Fashion--a brilliant look at the glittering world of turn-of-the-century Paris through the first in-depth study of the three women Proust used to create his supreme fictional character, the Duchesse de Guermantes.

Geneviève Halévy Bizet Straus; Laure de Sade, Comtesse de Adhéaume de Chevigné; and Élisabeth de Riquet de Caraman-Chimay, the Comtesse Greffulhe--these were the three superstars of fin-de-siècle Parisian high society who, as Caroline Weber says, "transformed themselves, and were transformed by those around them, into living legends: paragons of elegance, nobility, and style." All well but unhappily married, these women sought freedom and fulfillment by reinventing themselves, between the 1870s and 1890s, as icons. At their fabled salons, they inspired the creativity of several generations of writers, visual artists, composers, designers, and journalists. Against a rich historical backdrop, Weber takes the reader into these women's daily lives of masked balls, hunts, dinners, court visits, nights at the opera or theater. But we see as well the loneliness, rigid social rules, and loveless, arranged marriages that constricted these women's lives. Proust, as a twenty-year-old law student in 1892, would worship them from afar, and later meet them and create his celebrated composite character for The Remembrance of Things Past.

Caroline Weber is a professor of French and Comparative Literature at Barnard College, Columbia University; she has also taught at the University of Pennsylvania and Princeton. She is the author of Queen of Fashion: What Marie-Antoinette Wore to the Revolution (2006). She has written for The New York Times, The New York Times Book Review, Financial Times, London Review of Books, The Wall Street Journal, and New York magazine. She lives in New York City.

“Rich with intimate details of [their] extraordinary lives. . . . Weber has done a remarkable job of bringing to life a world of culture, glamour and privilege.” —The Wall Street Journal

“Extraordinary. . . . Not only a serious work of scholarship but also a riveting triple biography of three rebellious women . . . the first ‘it’ girls, reinventing themselves as celebrities long before Instagram.” —Condé Nast Traveler

“Engrossing and intelligent. . . . Skillfully guides readers through the heyday of fin-de-siècle France, unveiling its beauty and elegance, its cleverness and charm, but also its contradictions and inequities, its cruelty and wretchedness. . . . Both a delicious guilty-pleasure read and a penetrating, clear-sighted piece of literary commentary.” —The Yale Review

“Beguiling. . . . Sumptuous. . . . Weber has succeeded much as [Proust] did in bringing that lost time back to glorious life.” —Elaine Showalter, The New York Times

“Exhaustive, engaging, brilliantly researched. . . . A book that throws considerable light on Proust’s method. . . . In this artificial world, with all its flickering shadows, Proust watched as through glass, while the duchesses and their guests paraded inside, under the illusion somehow that they were fully real.” —Colm Tóibín, The New York Review of Books