White American Youth: My Descent into America's Most Violent Hate Movement -- and How I Got Out (Paperback) 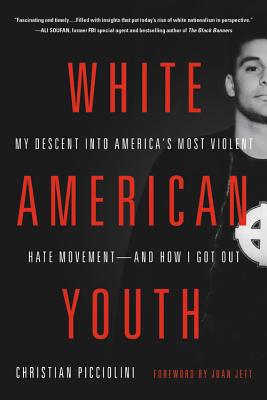 As featured on Fresh Air and the TED stage, a stunning look inside the world of violent hate groups by a onetime white supremacist leader who, shaken by a personal tragedy, abandoned his destructive life to become an anti-hate activist.

Raw, inspiring, and heartbreakingly candid, White American Youth explores why so many young people lose themselves in a culture of hatred and violence and how the criminal networks they forge terrorize and divide our nation. The story begins when Picciolini found himself stumbling through high school, struggling to find a community among other fans of punk rock music. There, he was recruited by a notorious white power skinhead leader and encouraged to fight with the movement to "protect the white race from extinction." Soon, he had become an expert in racist philosophies, a terror who roamed the neighborhood, quick to throw fists. When his mentor was sent to prison, sixteen-year-old Picciolini took over the man's role as the leader of an infamous neo-Nazi skinhead group.

Seduced by the power he accrued through intimidation, and swept up in the rhetoric he had adopted, Picciolini worked to grow an army of extremists. He used music as a recruitment tool, launching his own propaganda band that performed at white power rallies around the world. But slowly, as he started a family of his own and a job that for the first time brought him face to face with people from all walks of life, he began to recognize the cracks in his hateful ideology. Then a shocking loss at the hands of racial violence changed his life forever, and Picciolini realized too late the full extent of the harm he'd caused.

"Simultaneously horrifying and redemptive" (AlterNet), White American Youth examines how radicalism and racism can conquer a person's way of life and how we can work together to stop those ideologies from tearing our world apart.

*An earlier edition of this book was published as Romantic Violence

Christian Picciolini is an award-winning television producer, a public speaker, author, antiracism advocate, and a former extremist. After leaving the hate movement he helped create during the 1980s and 90s, he began the painstaking process of making amends and rebuilding his life. Christian went on to earn a degree in international relations from DePaul University and launched Goldmill Group, a counter-extremism consulting and digital media firm. In 2016, he won an Emmy Award for producing an anti-hate advertising campaign aimed at helping people disengage from extremism. For nearly two decades, Christian has helped hundreds of individuals leave hate behind through his disengagement work and the organizations he founded. He has spoken all over the world, including the TEDx stage, where he shares his unique and extensive knowledge about how to effectively prevent and counter extremism. Christian chronicles his involvement in and exit from the early American white-supremacist skinhead movement in his memoir, WHITE AMERICAN YOUTH, and is the featured subject in season 3 of WBEZ’s 'Motive' podcast, which received the 2021 National Edward R. Murrow Award for best podcast in large market radio. He showcased his disengagement work in a second book, BREAKING HATE: Confronting the New Culture of Extremism, as well as in the MSNBC documentary series of the same name, which aired in 2018-2019. He is the host of the 'F Your Racist History' podcast, a scripted history show that tells America's hidden, overlooked, and unknown racist origin stories. The first season is currently available across major podcast platforms.

"Christian Picciolini offers a vivid illustration of the path to extremism...a strange, toxic inversion of the American Dream."—New York Review of Books

"Fascinating and timely....Written with first-hand knowledge and authority...White American Youth not only tells Picciolini's gripping story, but it is filled with rare insights that put today's rise of white nationalism in perspective."
—Ali Soufan, former FBI special agent and New York Times bestselling author of The Black Banners: The Inside Story of 9/11 and the War Against al-Qaeda

"Describes the importance of empathy--how receiving it from others at a time when [Picciolini] felt he least deserved it was lifesaving, helping to pull him out of extremism."
—New York Times Book Review

"White American Youth takes the reader into the depths of the hate movement and sheds a valuable light on the mindset of those who can be lured into this dark world. Christian's astonishing change of heart is a testament to our endless capacity for personal transformation."—Lonnie Nasatir, regionaldirector, Anti-Defamation League

"Chilling...What we have in Christian Picciolini is something of an informant. He
asks us to understand, yes, but not with the intention to excuse--rather the hope to dismantle. He is an unabashed truth-teller, and a
willing weapon against hate and bigotry all over the world."—Rooster Magazine

"Christian's journey exemplifies how hate and violence are unsustainable, and tolerance, forgiveness, and love are the only ways forward. If Christian can change, there is hope for all humankind--a compelling and extraordinary story."
—Jane Rosenthal, Co-Founder, Tribeca Film Festival

"If it's disturbingly easy to embrace the white power ideology, it's not as easy to leave behind. Christian's experiences in White American Youth will shock you, but it's his escape and transformation that will inspire. His honest, often brutal memoir charts a journey from hopelessness to redemption. A profoundly important book, and a riveting read."
—John Horgan, author of The Psychology of Terrorism

"Like a skinhead Goodfellas, White American Youth takes us along on a young man's journey to the dark heart of a distasteful organization, somehow making the narrator's descent every bit as understandable and compelling--and all the more tragic. It's a powerful and moving memoir that brought tears to my eyes."
—Gerald Brennan, author of Resistance, Zero Phase, and Public Loneliness