How to Be Eaten: A Novel (Hardcover) 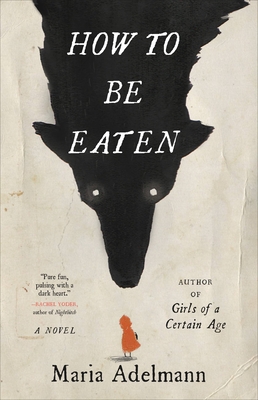 Five women and their fairy tale inspired stories of love and trauma skewer our own obsession with tabloid and reality TV, media’s victim-blaming and slut-shaming, and society’s tendency to disbelieve women’s stories. This book is whip-smart, and the characters are dimensional and real (even if you don’t really like all of them). A great pick for book clubs, there’s so much to pull apart here. I absolutely loved it!

Named a Best Book of May by TIME Magazine & Glamour

This darkly funny and provocative novel reimagines classic fairy tale characters as modern women in a support group for trauma.

In present-day New York City, five women meet in a basement support group to process their traumas. Bernice grapples with the fallout of dating a psychopathic, blue-bearded billionaire. Ruby, once devoured by a wolf, now wears him as a coat. Gretel questions her memory of being held captive in a house made of candy. Ashlee, the winner of a Bachelor-esque dating show, wonders if she really got her promised fairy tale ending. And Raina's love story will shock them all.

Though the women start out wary of one another, judging each other’s stories, gradually they begin to realize that they may have more in common than they supposed . . . What really brought them here? What secrets will they reveal? And is it too late for them to rescue each other?

Dark, edgy, and wickedly funny, this debut for readers of Carmen Maria Machado, Kristen Arnett, and Kelly Link takes our coziest, most beloved childhood stories, exposes them as anti-feminist nightmares, and transforms them into a new kind of myth for grown-up women.

Maria Adelmann is the author of the short story collection Girls of a Certain Age, which explores the many impossible choices of modern girl and womanhood. Her work has been published by Tin House, n+1, Electric Literature, McSweeney's Internet Tendency, The Threepenny Review, the Indiana Review, Epoch, AQR, MQR, and many others, and has been selected by The Best American Short Stories as a distinguished story. You can follow her on Twitter or Instagram @ink176. How to Be Eaten is her first novel.

Named a Best Book of May by TIME Magazine, Glamour, and Bustle
Highlighted as a Hot New Release by The Washington Post, BookRiot, USA TODAY, Lithub and The Millions

“Even better than it sounds, HOW TO BE EATEN presents vividly real women haunted by their fairy tale pasts in this deliciously angsty debut. Pure fun pulsing with a dark heart.”—Rachel Yoder, author of Nightbitch

"Gorgeously written and mind-bending, How To Be Eaten is fiction as a magic trick: by redrawing these archetypal characters with modern, vivid, and gothic specificity, Adelmann reminds us that, be it enchanting or devastating, our myths remain."
—Julia May Jonas, author of Vladimir

“In this wildly imaginative and trenchant novel, female characters from mythic fairytales emerge as modern-day heroes capable of reclaiming their lives from the trauma of their past. A deft exploration of trauma, authorship, the power of storytelling, and the healing potential of connection, How To Be Eaten will stun readers page after page, offering an unforgettable, empowering, and above all entertaining tale of reclamation and transformation.”—Christie Tate, New York Times bestselling author of Group

“Maria Adelman does more than reinvent the fairytale, she brings it into the twenty-first century, frankenbites and all. From Bluebeard to The Bachelor, Adelmann spins ‘familiar’ tales together into gold. Funny, violent, cutting, and insightful, How to Be Eaten made me want to join this unlikely group of confidants and start confessing my own secrets, just to keep the conversation going.”—Gwen E. Kirby, author of Shit Cassandra Saw

“Maria Adelmann’s debut novel is jagged and daring and darkly funny. Her wit is an exquisite instrument, one she uses to shred the myths by which capitalism and patriarchy exploit and commodify the female quest for love and selfhood. If you’ve ever hate-watched a reality TV show, or struggled with the blithe misogyny of a fairytale, this is the book for you.”
—Steve Almond, author of Bad Stories and All the Secrets of the World

"The classic characters transfer horrifyingly well to our times…The book is funny and dark, and poignant, as the characters long to be believed in a world that often sees violence against women as just a myth.”—GLAMOUR, Ten Best Books of the Month

“Each narrative has a strangeness heightened by twists and modern details…Adelmann wants us to reconsider stories we think we know inside-out and see the inequity and terror we’ve ingested from fairy tales. Her most fiendish trick may be one that she shows to the reader long before the characters learn it — an important reminder not to take anything at face value.”—WASHINGTON POST

"a fresh and inventive gem."—Publishers Weekly

“Adelmann travels the well-worn paths of some of the Brothers Grimm  most famous fairy tales with stylistic panache and 21st-century verve. However, it's her nuanced consideration of our own culpability that makes this book unique. In the end, Adelmann’s true subject is actually her audience, the great anonymous we who consumes the horrors of violent husbands, ravaging wolves, hungry witches, and made-for-TV love stories with such compulsive demand we never pause to think what might come after the happy ending. Both a meditation on trauma and a sendup of our society’s obsession with scripted reality, this book sings.”

“In this modern retelling of classic fairy tales, Adelmann shatters ‘happily ever after’…and brilliantly brings to light the historical exploitation and manipulation of female trauma in the media. With the current fascination with true crime and reality television, this powerful first novel holds up a mirror to the reader and challenges our perceptions of truth.”—Booklist, Starred Review

“Shocking, surprisingly humorous, and heavily in tune with modern depictions of feminine trauma and the surprising bonds such experiences can create between wildly different personalities, How to Be Eaten is a richly imaginative read for those who like their fairytales on the darker side.”—The Manhattan Book Review

“After her well-received collection Girls of a Certain Age, Adelmann offers a wickedly imaginative work envisioning fairy-tale characters as members of a trauma support group in contemporary New York.”—LIBRARY JOURNAL

“A fairy tell reimagining unlike any other you’ve ever experienced…How To Be Eaten is an intriguing take on what it means to exist in the world as a woman in the 21st century and trauma in the digital age. It’s also just a really entertaining read.”

"Adelmann’s debut is a darkly funny, thought-provoking take on what happens after happily ever after."—TIME Magazine

"A sardonic, poignant novel that moves in unexpected directions across each and every page, How to Be Eaten is a whip-smart invitation to reimagine familiar fairy tales in a modern age."—Kerry McHugh, Shelf Awareness

“Adelmann’s feminist debut novel takes the classic fairy tales of our youth and turns them on their head.”—The Millions

“Adelmann spins gold…weaving together two high-concept premises into one coherent and complex narrative that pulls off several impressive tricks along the way…The worldbuilding is immersive and original, and she doesn’t reimagine the fairytales she pulls from so much as implode them…The question of what happens to the fairytale characters after the fairytale ends? could easily be taken in a run-of-the-mill direction, but Adelmann answers it in a way that feels genuinely fresh, thrilling, and even self-referential,  baking into the novel’s premise the very idea that stories, no matter how often they’re told and retold, can always be broken apart and fashioned into something new.”
—AUTOSTRADDLE