The Jack Bank: A Memoir of a South African Childhood (Hardcover) 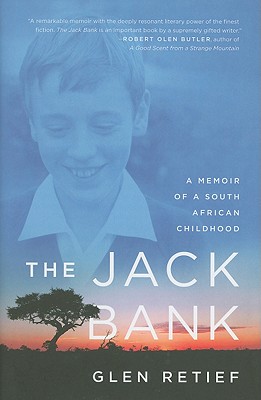 An extraordinary, literary memoir from a gay white South African, coming of age at the end of apartheid in the late 1970s.  Glen Retief's childhood was at once recognizably ordinary--and brutally unusual.

Raised in the middle of a game preserve where his father worked, Retief's warm nuclear family was a preserve of its own, against chaotic forces just outside its borders: a childhood friend whose uncle led a death squad, while his cultured grandfather quoted Shakespeare at barbecues and abused Glen's sister in an antique-filled, tobacco-scented living room.

But it was when Retief was sent to boarding school, that he was truly exposed to human cruelty and frailty. When the prefects were caught torturing younger boys, they invented "the jack bank," where underclassmen could save beatings, earn interest on their deposits, and draw on them later to atone for their supposed infractions. Retief writes movingly of the complicated emotions and politics in this punitive all-male world, and of how he navigated them, even as he began to realize that his sexuality was different than his peers'.

GLEN RETIEF is an Assistant Professor of English and Creative Writing at Susquehanna University. He has been published in a variety of literary journals and quarterlies and awarded a James Michener Writing Fellowship and the AWP Intro Journals Award for Creative Nonfiction. He lives in Sunbury, Pennsylvania.

"If it only dealt with his growing up against the harrowing backdrop of apartheid in a South African military boarding school trained to groom privileged white boys like him into violent oppressors — “jacks” are beatings — then this would be a riveting memoir; the fact that Retief was also coming of age as a gay man makes it essential reading."--Advocate

"Probing deeply into his personal memories of race, sexuality, and violence, creative writing instructor Retief has written a potent, evocative chronicle of his youth."--Publishers Weekly

"Eloquent...readers everywhere will be caught by the searing detail about family, friendship, sex and love."--Booklist

“A remarkable memoir with the deeply resonant literary power of the finest fiction. The Jack Bank  is an important book by a supremely gifted writer.”—Robert Olen Butler, author of A Good Scent from A Strange Mountain

“This moving book explores the emotions of exile as few stories about leaving home do. A passionate writer, Retief turns his tale from attachment to detachment, from letting go to letting be.”—Thomas Larson, author of The Saddest Music Ever Written

“One of those books that you never forget and never stop talking about.  Retief belongs in the pantheon of white African writers Alexandra Fuller, Peter Godwin, Coetzee, and Gordimer.”—Bob Shacochis, National Book Award-winning author of The Immaculate Invasion

“Glen Retief’s Jack Bank is a transgressive, harrowing and illuminating work of literary art.  In a language marked by a brutal childhood in the last years of the apartheid regime, and with uncommon wisdom, Retief’s epiphanic narrative draws us into regions of  cultural importance beyond the scope of traditional memoir.  Thus, he changes what we imagine this genre to be, allowing it to become something truer.”—Carolyn Forché, author of The Country Between Us

"This is one of the best memoirs I've read in years, difficult to put down, riveting...  Unforgettable, lyrical and beautifully written... I'll be shocked if The Jack Bank is not hailed as one of the best books of the year."—Steve Yarbrough, author of Safe from the Neighbors