Finding Ultra: Rejecting Middle Age, Becoming One of the World's Fittest Men, and Discovering Myself (Hardcover) 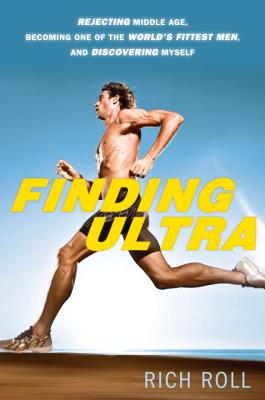 Finding Ultra is Rich Roll’s incredible-but-true account of achieving one of the most awe-inspiring midlife physical transformations ever.

One cool evening in October 2006, the night before he was to turn forty, Rich experienced a chilling glimpse of his future. Nearly fifty pounds overweight at the time and unable to climb the stairs without stopping, he could see where his current sedentary lifestyle was taking him.

Most of us, when granted such a moment of clarity, look the other way—but not Rich.

Plunging into a new way of eating that made processed foods off-limits and that prioritized plant nutrition, and vowing to train daily, Rich morphed—in a matter of mere months—from out-of-shape midlifer to endurance machine. When one morning ninety days into his physical overhaul, Rich left the house to embark on a light jog and found himself running a near marathon, he knew he had to scale up his goals.

How many of us take up a sport at age forty and compete for the title of the world’s best within two years? Finding Ultra recounts Rich’s remarkable journey to the starting line of the elite Ultraman competition, which pits the world’s fittest humans against each other in a 320-mile ordeal of swimming, biking, and running. And following that test, Rich conquered an even greater one: the Epic5—five Ironman-distance triathlons, each on a different Hawaiian island, all completed in less than a week.

But Finding Ultra is much more than an edge-of-the-seat look at a series of jaw-dropping athletic feats—and much more than a practical training manual for those who would attempt a similar transformation. Yes, Rich’s account rivets—and, yes, it instructs, providing information that will be invaluable to anyone who wants to change their physique. But this book is most notable as a powerful testament to human resiliency, for as we learn early on, Rich’s childhood posed numerous physical and social challenges, and his early adulthood featured a fierce battle with alcoholism.

Ultimately, Finding Ultra is a beautifully written portrait of what willpower can accomplish. It challenges all of us to rethink what we’re capable of and urges us, implicitly and explicitly, to “go for it.”

Rich Roll has been featured on CNN and has been named "one of the world's 25 fittest men" by "Men's Fitness" magazine. He is a graduate of Stanford University and Cornell Law School. He lives in Los Angeles with his wife and four children and, when he isn't training or competing, manages the entertainment boutique Independent Law Group, LLP.

"Rich Roll's Finding Ultra is a testament to the power of the human spirit to overcome any obstacle, break down walls, and redefine what's possible."
- John Brenkus, Creator and Host of ESPN’s “Sport Science” and New York Times bestselling author of The Perfection Point

“If you liked Born to Run, you’ll love Finding Ultra…one of the best books about health and fitness that I’ve ever read.”
--Neal D. Barnard, MD, President, Physicians Committee for Responsible Medicine

“Roll has accomplished amazing things, but it is his ability to draw inspiring and uniquely insightful lessons from his experiences that sets him apart from other extreme athletes. Finding Ultra is a fascinating read full of practical tips.”
--Dean Karnazes, nationally bestselling author of Ultramarathon Man

“Finding Ultra is about a journey we all take as human beings, when we decide to pursue the impossible and live a life of mission. When I need to dig deeper, push harder, and find a little boost, Rich Roll is the guy who comes to mind.  He is inspiration embodied.”
--Sanjay Gupta, M.D., Emmy Award-winning Chief Medical Correspondent for CNN and New York Times bestselling author of Chasing Life and Cheating Death

“You walk away from reading this book knowing you have the total power to transform your life on every level…Roll is immensely likeable, a most compelling storyteller, and a true shaman of health and fitness!”
--Kathy Freston, New York Times bestselling author of Quantum Wellness and Veganist

"This awesome piece of writing – one-part memoir, one-part how-to, and one part megadose of gut truth – reminds us to wake up and live our best life.  Prepare to be entertained, but most of all, prepare to be inspired.”
--Mel Stewart, 14-Time National Champion, former World Record Holder, and Winner of Two Olympic Gold Medals in swimming

“I loved this.  A rare book, unusual for its honesty and willingness to bare all, that really does deserve such superlatives as ‘riveting’ and ‘compelling.’  I was moved by watching Roll conquer his demons, and felt privileged to share in his eventual enlightenment.  By laying it on the line, Roll absolutely wins us over.”
--Rip Esselstyn, New York Times bestselling author of The Engine 2 Diet

“An incredibly inspirational book about achieving greatness at any age through self-belief and a positive attitude.  Rich Roll is a true champion of life and sport."
--Levi Leipheimer, Two-Time Stage Winner of the Tour de France and Olympic Time-Trial Bronze Medalist

"Finding Ultra is an inspired first-person account of fast living and even faster swimming, biking and running that will leave you convinced of the power of your own will."
--Brendan Brazier, bestselling author of Thrive

“A tribute to the fortitude of the human spirit, and the power each of us has to grab hold of our life and achieve the unexpected.  For anyone who feels stuck, Rich offers sage advice on everything from relationships to lifestyle to diet to spiritual well-being.”
-Dave Zabriskie, Five-Time National Time-Trial Champion in cycling

“An inspiring story of a man whose life took a tragic turn but then rebounded spectacularly.  Down but not out, Rich Roll rose like a phoenix, taking the commitment to his own health to a new level and achieving a remarkable transformation. I believe everyone will be able to relate to this plant-powered athlete’s riveting story and perhaps garner some inspiration for their own journey.  A top read!”
-Luke McKenzie, Five-Time Ironman Champion