The Accidental Universe: The World You Thought You Knew (Hardcover) 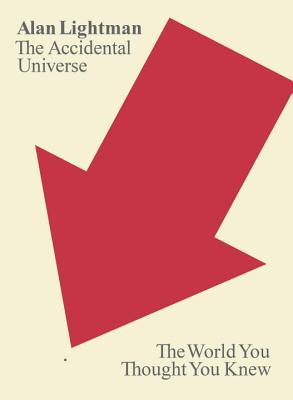 By Alan Lightman
Hard to Find - May not be reprinted

“Alan Lightman brings a light touch to heavy questions. Here is a book about nesting ospreys, multiple universes, atheism, spiritualism, and the arrow of time. Throughout, Lightman takes us back and forth between ordinary occurrences—old shoes and entropy, sailing far out at sea and the infinite expanse of space.

“In this slight volume, Lightman looks toward the universe and captures aspects of it in a series of beautifully written essays, each offering a glimpse at the whole from a different perspective: here time, there symmetry, not least God. It is a meditation by a remarkable humanist-physicist, a book worth reading by anyone entranced by big ideas grounded in the physical world.”
—Peter L. Galison, Joseph Pellegrino University Professor, Harvard University

Alan Lightman is the author of six novels, including the international best seller "Einstein's Dreams "and "The Diagnosis, " which was a National Book Award finalist. He is also the author of two collections of essays and several books on science. His work has appeared in "The Atlantic, Granta, Harper's Magazine, The New Yorker, The New York Review of Books, " and "Nature, "among other publications. A theoretical physicist as well as a writer, he has served on the faculties of Harvard and MIT, where he was the first person to receive a dual faculty appointment in science and the humanities. He lives in the Boston area.

“Lightman is one of the few physicists who can name-check the Dalai Lama, astronomer Henrietta Leavitt, Dostoevsky, and dark energy in the same work, while deftly guiding readers through discussions of modern physics and philosophy. Here he has composed a thoughtful, straightforward collection of essays that invite readers to think deeply about the world around them.” —Publishers Weekly (starred review)

“Regardless of outstanding interests in science or religion, any reader will enjoy pondering, through well-organized and graceful prose, what can be objectively proven about the world in which we live and what remains a mystery.” —Emily Rapp, Boston Globe

“Alan Lightman might be the only writer who can dance through not just one but seven universes in a book not much larger than a human hand. . . . Above all, Lightman has an appealing humility and affection for the mysterious, and an even more attractive compassion for humans, with their short lives and big questions.” —Margaret Quamme, Columbus Dispatch

“All of the essays in this collection are rewarding, but the most intriguing for popular science lovers will be the first, which gives the book its title.” —Laura Miller, Salon

“Humanity’s resistance to change is a recurrent theme in The Accidental Universe. We accept that the universe is in a state of decay but yet, we deny our mortality. As an atheist, Lightman denies the consolation of religion yet bravely confesses that he too cannot accept his death, inevitable though it may be. Life, Lightman offers, may be more precious and beautiful because of its fleeting nature—not in spite of it. Science and religion both share a sense of wonder, Lightman observes, and it is this sense of wonder that can sustain us in a universe both beautiful and strange.” —Matt Staggs, Everyday eBook

“As he’s demonstrated in highly original novels like Einstein’s Dreams and Mr. g, Alan Lightman possesses the mind of a theoretical physicist and the soul of an artist. . . . While Lightman hopes ‘there will always be an edge between the known and the unknown,’ he offers intriguing glimpses of how the gulf we too often perceive between science and the rest of life might be bridged.” —Shelf Awareness

“Physicist and novelist Alan Lightman—who also in this book shows himself to be a gifted essayist—has written not so much about cosmology as his title might imply but about our direct, subjective experience with it. . . . We are not observers on the outside looking in. We are on the inside too.” —New York Journal of Books

“In The Accidental Universe, Alan Lightman tackles big questions of life and death, morality and human consciousness—in a universe that may be far bigger and much stranger than we thought.  It’s a universe that also may be fundamentally unknowable, as if God is making other universes where we can't see them and will never know them. There is no writer quite like Alan Lightman, and his calm, humane, and always intelligent voice guides us along strange paths into nature and our human selves.” —Richard Preston, author of The Hot Zone

“Science is changing the way we think, especially about ourselves. As a guide to the multiple identities that science now offers, you'll want this beautiful book—poetic, humanistic, personal, inspiring. As a physicist, novelist, observer of coastal birds and the stars, Alan Lightman covers a lot of ground. Among so many other things, Lightman asks his reader to consider immortality, multiple universes, the possibility of a cyborg world and those who might resist its seductions. I couldn't put it down; a thrilling read.” —Sherry Turkle, professor of the Social Studies of Science and Technology, MIT, and author of Alone Together

“A Walden for our digital, cosmological, and quantum age from a modern-day Thoreau. Not since Fred Hoyle in another era (and universe) has anyone dared to cover such a sweeping domain, and no one so elegantly, so parsimoniously, and so personally.” —Jon Kabat Zinn, professor of Medicine Emeritus and founding director of the Stress Reduction Clinic and the Center for Mindfulness in Medicine, Health Care, and Society at the University of Massachusetts, author of Full Catastrophe Living

“Alan Lightman is one of the all-too-few scientists whose writings achieve genuine literary quality. Anyone, with or without a scientific background, will be stimulated and inspired by these essays.” —Martin Rees, Professor of Cosmology and Astrophysics, Cambridge University, and Astronomer Royal of England, author of Our Final Hour

“Alan Lightman brings a light touch to heavy questions. Here is a book about nesting ospreys, multiple universes, atheism, spiritualism, and the arrow of time. Throughout, Lightman takes us back and forth between ordinary occurrences—old shoes and entropy, sailing far out at sea and the infinite expanse of space. In this slight volume, Lightman looks toward the universe, and captures aspects of it in a series of beautifully written essays, each offering a glimpse at the whole from a different perspective: here time, there symmetry, not least God. It is a meditation by a remarkable humanist-physicist, a book worth reading by anyone entranced by big ideas grounded in the physical world.” —Peter Galison, Joseph Pellegrino University Professor, Harvard University

“Lightman is that rare and wonderful creature: a theoretical physicist who has taught at Harvard and MIT and also written six novels . . . so demand among smart readers should be high.” —Library Journal

“All of the essays in The Accidental Universe are carefully argued, and there is not a shrill or dogmatic line in any of them. They’re enlivened by Lightman’s precise, graceful prose and a novelist’s skill for conjuring scenes and characters. . . . Readers will almost certainly come away with more questions than conclusions, as well as with a fresh curiosity about theoretical physics. No doubt that’s just what Lightman would hope for.” —Maria Browning, Chapter 16

“Is our universe merely a statistical fluke, a rare accident that we happen to be able to observe? In The Accidental Universe, Alan Lightman introduces readers to physicists' latest grapplings with the vastness of space, the ineluctable march of time, and the origin of mass. Vivid, personal, and often moving, Lightman's reflections illuminate scientists' zeal for lawfulness, symmetry, and order, as well as their arresting sense of wonder.” —David Kaiser, author of How the Hippies Saved Physics: Science, Counterculture, and the Quantum Revival

“Alan Lightman is not only a graceful writer, he is a juggler of scales and perspectives, an informed questioner who works his way in deeper with each exertion. The Accidental Universe disassembles our theoretical surround, cleans and tests all arguments and assumptions, and then, dexterously, puts it all back together. Voila! A book born of stimulating discussions, it will now provoke them.” —Sven Birkerts, author of The Gutenberg Elegies: The Fate of Reading in an Electronic Age

“This essay collection could have only been penned by Lightman, that rare hybrid of physicist and storyteller. By shining the beam of his intellect on the cosmos, he illuminates our personal lives in the reflections.” —David Eagleman, Neuroscientist, author of Sum and Incognito

“A sublime reminder of the mysteries behind and beyond the familiar—a call to wonder.” —Brian Christian, author of The Most Human Human

“Alan Lightman deftly weaves the contradictions and mystery of our experience with the awe of exploring the vast physical universe. His graceful book inspires conversation about the wonder of our existence. It invites us to look up at the sky and see a grander, more comprehensible universe.” —Margaret Geller, Professor of Astronomy, Harvard-Smithsonian Center for Astrophysics, and recipient of the MacArthur Foundation Fellowship