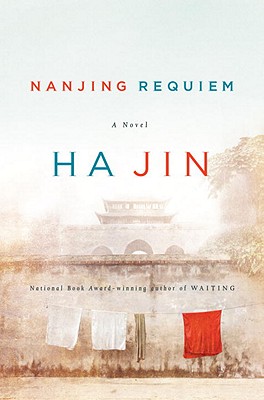 By Ha Jin
$26.95
Special Order from the publisher

The award-winning author of Waiting and War Trash returns to his homeland in a searing new novel that unfurls during one of the darkest moments of the twentieth century: the Rape of Nanjing.

In 1937, with the Japanese poised to invade Nanjing, Minnie Vautrin—an American missionary and the dean of Jinling Women’s College—decides to remain at the school, convinced that her American citizenship will help her safeguard the welfare of the Chinese men and women who work there. She is painfully mistaken. In the aftermath of the invasion, the school becomes a refugee camp for more than ten thousand homeless women and children, and Vautrin must struggle, day after day, to intercede on behalf of the hapless victims. Even when order and civility are eventually restored, Vautrin remains deeply embattled, and she is haunted by the lives she could not save.

With extraordinarily evocative precision, Ha Jin re-creates the terror, the harrowing deprivations, and the menace of unexpected violence that defined life in Nanjing during the occupation. In Minnie Vautrin he has given us an indelible portrait of a woman whose convictions and bravery prove, in the end, to be no match for the maelstrom of history.

At once epic and intimate, Nanjing Requiem is historical fiction at its most resonant.

“Since Ha Jin won the National Book Award for Waiting, his writing keeps opening up like a big, beautiful fan; this book sounds as far-reaching as anything he has ever written. And even bolder about looking into last century’s heart of darkness. Essential where good literature is read.” –Library Journal

"Jin describes horrible acts in a style bordering on reportage, lending bitter realism to his chronicle of violence and privation.... Jin paints a convincing, harrowing portrait of heroism in the face of brutality." –Publishers Weekly

“Ha Jin brings a cool, spare documentary approach to this rich trove of material…a book that renders a subtle and powerful vision of one of the 20th century’s most monstrous interludes.” –New York Times Book Review

“Requiem is necessary testimony…Jin’s loyal readers will notice a bluntness—jarringly effective here—different from his previous works, as if Jin, too, must guard himself against the horror, the horror.” –Library Journal, starred review

“Should be required reading for anyone who isn't familiar with what happened at Nanjing…Courageously and unflinchingly, Ha Jin has taken an important step in remembering both the victims and the heroes of that senseless slaughter.” –Associated Press

“Manages to deliver glimpses of the massacre in all its reeling madness: the young woman who is driven insane by her manifold violations; the ways violence can smite the spirit, even when the body is spared; the sight of ‘shells bursting in the air like black blossoms.’ Nanjing Requiem makes the most of Vautrin’s sad fate: the grotesquely unjust accusation by her supervisor that she didn’t do enough, that she was ultimately ‘a traitor to the Chinese people.’ Ha Jin gives us a poign­ant twist in the fate of our narrator Anling, whose grown son just happens to be in Tokyo taking a Japanese wife when all hell is being unleashed in his homeland.” –Washington Post

“Jin, who has eloquently chronicled the Chinese experience both at home and in the United States, fastens on a single drama within the larger one of the massacre…staggering.” –Obit Magazine

“Jin has done a wonderful job of weaving an ordered tapestry from the phantasmagoric fog of that episode. His control over his characters is masterful; Japanese officers can be kindly, victims can be stridently impatient for vengeance. All are human.” –Washington Independent Review of Books

“Nanjing Requiem remains muted in memory. What you most remember, once you put down the book, is not agony and hopelessness, not darkness and blood, but rather the reach of human goodness…When we leave this crushingly beautiful, crushingly sad book, Ha Jin leaves us with the memory of good work, people saving lives, the worth of reaching out, even when death and despair prevail.” –Pop Matters

“Nanjing Requiem is both plainspoken and revelatory, the saddest of Ha Jin’s novels. After this past decade of armed conflict, which has put millions of civilians at risk, his reminder of the human costs of war is also, unfortunately, timely.” –Boston Globe

“Sparse and unadorned, his prose refuses to call attention to itself. Jin’s angles are rarely oblique, and his economy of words feels almost utilitarian: his is a concern with precision, honesty, and direct description… Nanjing Requiem’s restraint is deliberate, and its narrative simplicity proves not a fault, but an achievement… Though his subject of choice is deeply disquieting, Jin does not set out to shock. Shying from bombast and hyperbole, his syntax relishes the minimal and leaves few words out of place. The power of his prose lies not in any self-indulgent flourish, but in its far-reaching resonance.” –Open Letters Monthly

“The deeper the reader delves into the book, the greater the sense of illumination…Jin again shows himself to be one of our most humane writers, maintaining an honesty that just can't be faked.” –Barnes & Noble Review

“A tale worth retelling.” –Pittsburgh Post-Gazette