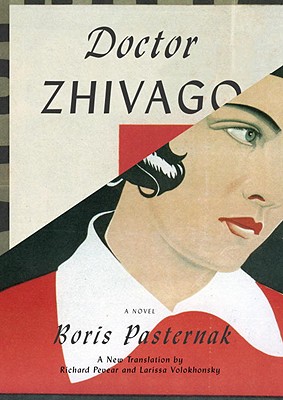 By Boris Pasternak, Richard Pevear (Translator), Larissa Volokhonsky (Translator)
Hard to Find - May not be reprinted

Boris Pasternak's widely acclaimed novel comes gloriously to life in a magnificent new translation by Richard Pevear and Larissa Volokhonsky, the award-winning translators of War and Peace and Anna Karenina, and to whom, The New York Review of Books declared, the English-speaking world is indebted.

First published in Italy in 1957 amid international controversy the novel was banned in the Soviet Union until 1988, and Pasternak declined the Nobel Prize a year later under intense pressure from Soviet authorities Doctor Zhivago is the story of the life and loves of a poet-physician during the turmoil of the Russian Revolution. Taking his family from Moscow to what he hopes will be shelter in the Ural Mountains, Zhivago finds himself instead embroiled in the battle between the Whites and the Reds. Set against this backdrop of cruelty and strife is Zhivago's love for the tender and beautiful Lara: pursued, found, and lost again, Lara is the very embodiment of the pain and chaos of those cataclysmic times.
Stunningly rendered in the spirit of Pasternak's original resurrecting his style, rhythms, voicings, and tone and including an introduction, textual annotations, and a translators note, this edition of Doctor Zhivago is destined to become the definitive English translation of our time.

A poet, translator, and novelist, Boris Pasternak was born in Moscow in 1890. In 1958 he was awarded the Nobel Prize in Literature but, facing threats from Soviet authorities, refused the prize. He lived in virtual exile in an artists community near Moscow until his death in 1960. Richard Pevear and Larissa Volokhonsky are the award-winning translators of Tolstoy s War and Peace, among many other works of Russian literature. They are married and live in France."

"The previous English-language translation of Boris Pasternak’s Doctor Zhivago was made and brought out in England and the U.S. in extreme haste, on the eve of the 1958 Nobel Prize award to its author that triggered one of the fiercest political storms of the Cold War era. This new translation by Richard Pevear and Larissa Volokhonsky is for the first time based on the authentic original text, reflects the present, deeper level of understanding of the great masterpiece of 20th century Russian literature and conveys its whole artistic richness with all its complexities and subtleties that had escaped the attention of the earlier translators and readers.

"In faithfulness to the original, attention to stylistic details and nuances, lucidity, and brilliance it matches Pevear and Volokhonsky’s superb translations of such monumental works of the classics of Russian literature as Tolstoy’s War and Peace and Dostoevsky’s The Brothers Karamazov. The new edition will have an even more profound effect on our understanding of 20th century Russia that the first appearance of the novel had more than half a century ago."
—Lazar Fleishman, Professor of Russian Literature, Stanford University

“Richard Pevear and Larissa Volokhonsky have once again provided an outstanding translation of a major Russian novel. They capture Pasternak’s ‘voice’ with great skill. Thanks to their sensitive rendering, those reading Doctor Zhivago in English can now get a far better sense of Pasternak’s style, for they have produced an English text that conveys the nuances (along with the occasional idiosyncrasies) of Pasternak’s writing. Notably as well, their version includes some phrases and sentences that inexplicably were omitted by the original translators. The text is accompanied by useful (but not overwhelming) notes in the back that provide information about many historical and cultural references that would otherwise be obscure for those coming to the novel for the first time. Without a doubt, their version will become the standard translation of the novel for years to come.”
—Barry Scherr, Mandel Family Professor of Russian, Dartmouth College