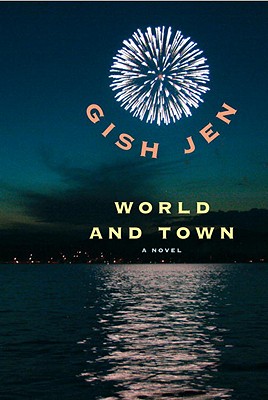 By Gish Jen
$26.95
Special Order from the publisher

From the much-loved author of Who’s Irish? and The Love Wife, a world-sized novel set in a small New England town.

Hattie Kong—the spirited offspring of a descendant of Confucius and an American missionary to China—has, in her fiftieth year of living in the United States, lost both her husband and her best friend to cancer. It is an utterly devastating loss, of course, and also heartbreakingly absurd: a little, she thinks, “like having twins. She got to book the same church with the same pianist for both funerals and did think she should have gotten some sort of twofer from the crematorium.”

But now, two years later, it is time for Hattie to start over. She moves to the town of Riverlake, where she is soon joined by an immigrant Cambodian family on the run from their inner-city troubles, as well as—quite unexpectedly—by a just-retired neuroscientist ex-lover named Carter Hatch. All of them are, like Hattie, looking for a new start in a town that might once have represented the rock-solid base of American life but that is itself challenged, in 2001, by cell-phone towers and chain stores, struggling family farms and fundamentalist Christians.

What Hattie makes of this situation is at the center of a novel that asks deep and absorbing questions about religion, home, America, what neighbors are, what love is, and, in the largest sense, what “worlds” we make of the world.

Moving, humorous, compassionate, and expansive, World and Town is as rich in character as it is brilliantly evocative of its time and place. This is a truly masterful novel—enthralling, essential, and satisfying.

Gish Jen is the author of three previous novels and a book of stories. Her honors include the Lannan Literary Award for fiction and the Mildred and Harold Strauss Living Award from the American Academy of Arts and Letters. She lives with her husband and two children in Cambridge, Massachusetts.

“Gish Jen’s triumph of a novel World and Town starts with all the energy of a runaway train—or actually, a runaway trailer. Jump on.   You’ll enjoy the ride. . . . What interests the author is how we interpret family, culture and home. . . . From family plots to subplots, Jen orchestrates everything.   In fact, there's something symphonic about the novel itself . . . her richest, warmest work yet.” –Ellen Kanner, The Miami Herald


“What a pleasure to read this smart, warm novel from Gish Jen [which] manages in its amiable, unhurried way, to consider the challenges of immigration, the limits of scientific rationalism, and the sins of fundamentalism. Yes, it’s a heavy load for such a buoyant story to carry, but Jen knows how to create thoughtful characters who can talk and think about complex issues without making us take notes.”—Ron Charles, The Washington Post

“One of Jen’s greatest strengths is her fluid point of view, which she employs beautifully here, alternating perspectives . . . Nothing is fixed for these unsettled characters, who keep trying to build new lives in a bewildering world, and whose victories, when they come, bring not rapture but a ‘defining grace, bittersweet and hard-won.’”
—Donna Rifkind, The New York Times Book Review

“A powerful message . . . A novel not about being, but becoming, American, which to some extent means the same thing. . .  Jen’s prose is dense, minutely descriptive and often arresting .” —Malena Watrous, The San Francisco Chronicle

“A beautifully written novel of wit and insight and great generosity. Jen’s novels do not come along often, so this is not one to miss.” —Claire Hopley, The Washington Times

“Jen knows the rhythm of life in a small town, where swirls of gossip can set events in motion, and personal history exerts a stronger force than anything that happens in the wider world . . . She’s generous to her characters, even the violent or larcenous ones. Her bighearted, rumpled novel gives them room to change directions and find new ways to live together.” –Margaret Quamme, The Columbus Dispatch

“In this thick, satisfactory sprawl of a read . . . Jen gracefully introduces some of the great issues of or time: how the shock of 9/11 reverberated from city to town; how lost souls can cling meanly to fundamentalism; how it feels when a chain store bulldozes into a mom-and-pop community, or a family farm finally collapses . . . When she slides into the voice of a 15-year-old Cambodian girl or the bitter old-timer angry over the loss of his farm and wife, World and Town practically sings.” —Karen Valby, Entertainment Weekly

“World and Town is lavish with acutely drawn incidents and characters . . . An imaginatively questioning and shrewdly written novel of our times.” —Richard Eder, The Boston Globe

“Jen is masterful at mixing keen observation with wit and wisdom . . . In her latest, she is at her best, diving into the pain and promise of coming to America.” —Amy Scribner, Bookpage

“Jen’s sensitivity and charming humor should vault this to the top of book groups’ must reads.” —Beth E. Anderson, Library Journal

“Unique, dense, enthralling . . . Jen unwinds another expansive story of identity and acceptance, deploying voices that are as haunting and revealing as they are original.”  —Publishers Weekly, starred review and Pick of the Week