We Are Proud Boys: How a Right-Wing Street Gang Ushered in a New Era of American Extremism (Hardcover) 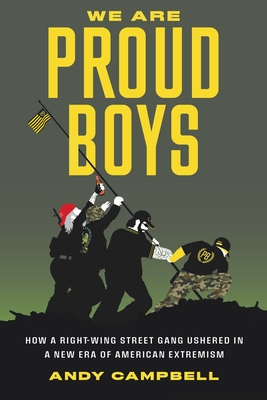 A gripping investigation into the nation’s most notorious far-right group, revealing how they created a new blueprint for extremism and turned American politics into a blood sport

After the 2016 election, Americans witnessed a frightening trend: the sudden rise of a host of new extremist groups across the country. Emboldened by a new president, they flooded political rallies and built fervent online presences, expanding rapidly until they were a regular sight at everyday demonstrations. Amid the chaos, one group emerged as a leader among the others, with matching outfits, bizarre rituals, and a reputation for violence: the Proud Boys.

From leading extremism reporter Andy Campbell, We Are Proud Boys is the definitive narrative exploration of this notorious street gang and all the far-right movements they’re connected to. Through groundbreaking new reporting, Campbell delivers the untold story of a gang of blundering, punch-happy goons who grew to become the centerpiece of American extremism and positioned themselves as the unofficial enforcement arm of the GOP. Beginning with their founding by Gavin McInnes, the media personality best known for co-founding VICE, Campbell takes us deep into the Proud Boys, laying bare their origins and their rise to prominence. As he exposes the group's noxious culture and strange rituals, he reveals how the ultimate project of the Proud Boys–to desensitize Americans to political violence–has succeeded entirely, culminating with Republicans calling the January 6 insurrection "legitimate political discourse." The bizarre, frightening story of the Proud Boys reveals the playbook they have created for domestic extremism, giving us the necessary insight to push back against radicalism in America before it swallows our democracy whole.

Andy B. Campbell is an investigative reporter and editor covering extremism, misinformation, and their intersection with national politics. He is currently based in New York, where he works on the breaking news desk at HuffPost. He is considered an expert on American extremism, having covered the modern rise of the far-right at the ground level, including the neo-Nazi rallies in Charlottesville, Virginia in 2017. His work is regularly cited in scientific studies and scholarly papers, and featured on network cable news and radio. Previously, he worked for The Brooklyn Paper and New York Post.

“To learn from Andy Campbell’s brave book how Donald Trump inspired the Proud Boys and how FOX hosts and MAGA Republicans then normalized this hateful, violent group is to see with fresh horror the enormity of the January 6, 2021 plot to overturn the will of the voters—and why all the inciters and enablers of that ongoing attack on our country must be held accountable if democracy is to survive in America.”—Nancy MacLean, National Book Award-finalist author of Democracy in Chains: The Deep History of the Radical Right’s Stealth Plan for America

“Andy Campbell brings together the pieces to help us understand the inner workings of one of the country’s most notorious far-right groups. An investigative feat, his work is essential reading for those wrestling to understand how homegrown extremist movements take hold and wreak havoc in America. With our country at such a precarious juncture—grappling with domestic terrorism, political polarization, and rampant disinformation—Campbell does the hard work of exposing the dangerous underbelly of the Proud Boys. A timely addition to the study of political violence in America.”—Ali Soufan, former FBI Special Agent and author of Anatomy of Terror: From the Death of bin Laden to the Rise of the Islamic State

"This brilliant and hilarious book explains how the country lost its mind and grown men put on designer uniforms to fight imaginary enemies in the name of whatever their addled brains believed that freedom is. If you’ve ever wondered how a potent mix of creeping fascism, male insecurity and grift came close to upending American democracy, then read Andy Campbell’s book right now."—Vegas Tenold, author of Everything You Love Will Burn: Inside the Rebirth of White Nationalism in America

“Andy Campbell fearlessly pulls back the curtain on the most dangerous organization in America today and how it has unleashed a politics of violence and menace on the landscape. His detailed, insightful, and sometimes astonishing reportage reveals how their street thuggery poses a very real threat to democracy itself. We Are Proud Boys is the definitive text on this threat, both for academics and the public—but it also makes for a gripping (and disturbing) read.”
—David Neiwert, author of Alt-America: The Rise of the Radical Right in the Age of Trump and Red Pill, Blue Pill: How to Counteract the Conspiracy Theories That Are Killing Us

"[This] chilling exposé illuminates Republicans’ fascist turn. Andy Campbell has delivered a smart, well-written, and brilliantly reported book about the street gang allied to Donald Trump and the GOP he commands....Campbell’s book provides an indispensable account of exactly how the Grand Old Party reached that disgraceful destination."—The Guardian

"We Are Proud Boys offers a definitive look at the neofascist warriors against democracy. Andy Campbell doesn’t mince words in his terrific new book....He concludes the introduction with an appropriate warning....It features a deep and revelatory history of the group....We Are Proud Boys vividly illustrates how these latter attacks are not merely loosely assembled gangs of thugs bused in for violence, but were meticulously planned events....Anyone trying to understand how and why American democracy is under attack owes it to themselves to read We Are Proud Boys. Campbell has written the definitive text on the organization to date, and the lessons and warnings it contains are well worth heeding."—Daily Kos

"We Are Proud Boys offers an in-depth look at this group, their ideology, their tactics, and their goals — the kind of coverage that was sorely missing from much of the media in the months leading up to January 6. We Are Proud Boys is an essential investigation of a group that has done so much to tear at the fabric of democracy while mostly being ignored by the mainstream press."—Salon

"Superb....Campbell lays out everything you need to know about the gang that helped organize a coup attempt in Washington, D.C. on January 6....We Are Proud Boys does the tough job of delving into the origins and myths that bolstered the gang, including the odd and cruel story behind the source of its name....Even if you’re already familiar with the Proud Boys, this book is a riveting read that reminds you of all the times that we could have stopped them."—The Progressive

“A vital investigation of the Proud Boys, the Republican Party's blackshirts, and a timely read as the GOP embraces a mode of politics defined by cruelty and triggering the libs.”—Christopher Mathias, Senior Reporter, HuffPost

“Buy it. Read it. An important work.”—Alex Mann, host of “The Eleventh” podcast

"A searing report on the rise of the Proud Boys during the Trump era....Riddled with jaw-dropping examples of the group’s extreme rhetoric and violent actions, this is a distressing and doggedly reported account of the dangers of political extremism."—Publishers Weekly