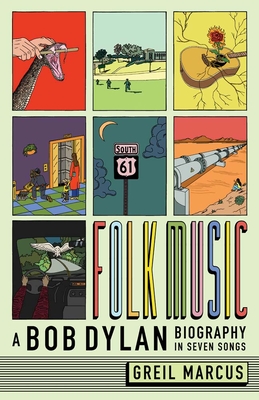 “The most interesting writer on Dylan over the years has been the cultural critic Greil Marcus. . . . No one alive knows the music that fueled Dylan’s imagination better. . . . Folk Music . . . [is an] ingenious book of close listening.”—David Remnick, New Yorker

Named a Best Music Book of 2022 by Rolling Stone

“Further elevates Marcus to what he has always been: a supreme artist-critic.”—Hilton Als

Across seven decades, Bob Dylan has been the first singer of American song. As a writer and performer, he has rewritten the national songbook in a way that comes from his own vision and yet can feel as if it belongs to anyone who might listen.

In Folk Music, Greil Marcus tells Dylan’s story through seven of his most transformative songs. Marcus’s point of departure is Dylan’s ability to “see myself in others.” Like Dylan’s songs, this book is a work of implicit patriotism and creative skepticism. It illuminates Dylan’s continuing presence and relevance through his empathy—his imaginative identification with other people. This is not only a deeply felt telling of the life and times of Bob Dylan but a rich history of American folk songs and the new life they were given as Dylan sat down to write his own.

Greil Marcus is the author of many books, from Mystery Train to Under the Red White and Blue: Patriotism, Disenchantment and the Stubborn Myth of the Great Gatsby. With Werner Sollors he is the editor of A New Literary History of America.

“The most interesting writer on Dylan over the years has been the cultural critic Greil Marcus. . . . No one alive knows the music that fueled Dylan’s imagination better. Marcus just published Folk Music: A Bob Dylan Biography in Seven Songs. It’s [an] ingenious book of close listening.”—David Remnick, New Yorker

“In elaborating Dylan’s musical journey Marcus puts on display a vast knowledge of America’s popular culture and a sardonic recognition of the flaws in our national character—flaws such as racial injustice and wealth inequality that folk music tries to address. The book is fast-paced, like a song, and hip. . . . [Marcus] closes on an elegiac note punctuated with love. ‘What will go out of the world with him?’”—Arthur Hoyle, New York Review of Books

“A book filled with genuine insights. . . . ‘Blowin’ in the Wind,’ the anthem that transformed a little-known folk singer into the conscience of a nation, is exhibit A for Mr. Marcus’s theory of empathy. . . . Mr. Marcus is at his best in exploring this rootedness.”—The Economist

“Marcus . . . has written more and better about Dylan than just about anyone, most recently in Folk Music.”—Carl Wilson, Slate

“Marcus’ profound expertise in the American cultural landscape blasts open new fissures in our understanding of this most mythologised of singer-songwriters. . . . The reader comes away marvelling at what Bob Dylan has done with such a violent cultural inheritance, and also at how enmeshed the beauty of the songs are with the brutality in life.”—Gregory Day, Sydney Morning Herald

“Rollicking. . . . Marcus’s close readings are full of discursive, meandering asides, and his prose is full of flourish. . . . Dylan’s fans will enjoy these lyrical reflections.”—Publishers Weekly

“Splendid biographical essays on that most elusive of subjects, the shape-shifter once known as Bobby Zimmerman. . . . Marcus delivers yet another essential work of music journalism.”—Kirkus Reviews (starred review)

“Reading one of these essays is a little bit like listening to Dylan’s own winding narrative lyricism. The author draws upon the same pop art approach as Dylan himself, merging imagery from popular and mass culture into fine art sensibilities. . . . An informative, if impressionistic, reflection.”—Gregory Stall, Library Journal

“As always with Marcus, his work is mesmerizing. . . . He creates a rich cultural stew of associations, from the folk revival to Black Lives Matter, from an episode of Homicide to One Night in Miami, and so much else in between as he makes far-flung connections seem inevitable. Just as Dylan allows a song to carry him away, readers will be transported by the sheer poetry of Marcus’ prose.”—June Sawyers, Booklist (starred review)

“Marcus mines the music of the artist from Minnesota’s Iron Range for its deeply American soul. . . . [He] combines interviews, liner notes, research and criticism to provide a cultural biography that shows how closely Dylan has followed the news and the zeitgeist over his seven-decade career.”—Bethanne Patrick, Los Angeles Times, “10 Books to Add to Your Reading List in October”

“Like a detective haunted by an abiding mystery, America’s first great rock critic has returned his focus to our most enigmatic songwriter. . . . [Marcus] marshals idiosyncratic arguments in a way that makes us hear old songs anew, defying the ever-quickening pace of life.”—Kevin Canfield, San Francisco Chronicle

“What ennobles [Folk Music] is Marcus’ love for his underlying subject: the soulful search for a truer America.”—Daniel Gewertz, Arts Fuse

“This is the good stuff: the stuff you can’t usually get in books. Greil Marcus is already the most important chronicler of Dylan. But here he outdoes himself. This book is rich with deep understanding, with caustically funny commentary, and a psychoanalysis, much needed, of Bob Dylan and of America.”—Rachel Kushner

“Decade after decade, Greil Marcus has proven himself to be not only a brilliant cultural critic about the music, lives, and stories that have helped shape contemporary American consciousness; he has also done much to articulate why our music has always stood at the axis of sound and politics. This book is not only a valuable addition to the canon, it further elevates Marcus to what he has always been: a supreme artist-critic.”—Hilton Als

“Here is Greil Marcus at his most brilliantly insightful, eloquent, persuasive, brimming with information about Bob Dylan and his music, unique in his ability to combine the most candid sort of memoirist prose with truly inspired commentary. As Dylan ‘sees himself’ in his subjects, so Greil Marcus ‘sees himself’ in Dylan, the most original musical genius of our time, the perfect subject for the most original music critic of our time.”—Joyce Carol Oates

“Greil Marcus’s writing on Dylan constitutes one of the great living bodies of work by one mold-breaking creative mind interpreting the art and meaning of another. Dylan’s multitudes ﬁnd their champion in Marcus’s critical exuberance.”—Todd Haynes

“Marcus is unsurpassed in showing how Dylan reflected the cultural moment even as he changed it. This moving, personal, compelling book traces Dylan’s complex relationship to American culture through some of Dylan’s most iconic songs, enabling us to understand these songs in fresh ways while also giving us a profound history of how we understand ourselves.”—Dana Spiotta