Mapping the Heavens: The Radical Scientific Ideas That Reveal the Cosmos (Paperback) 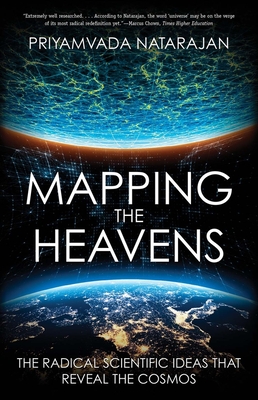 By Priyamvada Natarajan
$16.00
On Our Shelves Now. Click on the title to see details.

For all curious readers, a lively introduction to radical ideas and discoveries that are transforming our knowledge of the universe

This book provides a tour of the “greatest hits” of cosmological discoveries—the ideas that reshaped our universe over the past century. The cosmos, once understood as a stagnant place, filled with the ordinary, is now a universe that is expanding at an accelerating pace, propelled by dark energy and structured by dark matter. Priyamvada Natarajan, our guide to these ideas, is someone at the forefront of the research—an astrophysicist who literally creates maps of invisible matter in the universe. She not only explains for a wide audience the science behind these essential ideas but also provides an understanding of how radical scientific theories gain acceptance.

The formation and growth of black holes, dark matter halos, the accelerating expansion of the universe, the echo of the big bang, the discovery of exoplanets, and the possibility of other universes—these are some of the puzzling cosmological topics of the early twenty-first century. Natarajan discusses why the acceptance of new ideas about the universe and our place in it has never been linear and always contested even within the scientific community. And she affirms that, shifting and incomplete as science always must be, it offers the best path we have toward making sense of our wondrous, mysterious universe.

"Extremely well researched. . . . According to Natarajan, the word 'universe' may be on the verge of its most radical redefinition yet."—Marcus Chown, Times Higher Education

"I am studying the big picture as thrillingly projected in Mapping the Heavens, a strikingly lucid account of the expansion, not just of the universe, but of the way we have tried to understand it, from the Babylonians to black holes and dark matter."—Richard Holmes, "By the Book," New York Times Book Review

"By introducing the major players behind each discovery, Natarajan adds a lively human touch to her discussion, reinforcing the dynamism of a field that 'fans human curiosity and is driven by it as well.'"—Publishers Weekly (starred review)

"Both novel and absorbing. . . . Her phrase 'Mapping the Heavens' is both literal and metaphorical. Natarajan describes the revolutions that have taken place in our ability to explore the structure of our universe. But the point she makes is deeper. By describing developments in cosmology—including the discovery of other galaxies, the discovery of the expansion of the universe, the existence of dark matter, black holes, and the mysterious dark energy causing the observed expansion of the universe to be speeding up—she succeeds in demonstrating how the progress of fundamental science often challenges the mental ‘maps’ that scientists conceive to represent their ideas."—Lawrence M. Krauss, New York Review of Books

Priyamvada Naterajan is the winner of the 2018 Gustav Ranis International Book Prize for Mapping the Heavens: The Radical Scientific Ideas that Reveal the Cosmos.

"Mapping the Heavens gives a highly readable, insider's view of recent discoveries in astronomy with unusual attention to the instruments used and the human drama of the scientists."—Alan Lightman, author of The Accidental Universe and Einstein's Dream

"This excellent book describes the boisterous debates and hard slog whereby our current understanding of the cosmos has emerged. It's especially welcome as a faithful portrayal of how science is actually done."—Martin Rees, author of Just Six Numbers

"Priyamvada Natarajan’s love affair with the heavens began in childhood, continues with her notable work in astrophysics, and is now enhanced with this insightful overview of the hottest topics in astronomy today—including black holes, dark matter, dark energy, and exoplanets. Moreover, she traces how these ideas struggled to get accepted, providing the reader with an excellent peek at how science gets done."—Marcia Bartusiak, author of Black Hole and The Day We Found the Universe

"Part history, part science, all illuminating. If you want to understand the greatest ideas that shaped our current cosmic cartography, read this book."—Adam G. Riess, Nobel Laureate in Physics, 2011

"Here is an authoritative guide to the major cosmological breakthroughs of the past century. Natarajan writes as an accomplished guide to contemporary astronomy including dark matter and dark energy."—Owen Gingerich, Harvard-Smithsonian Center for Astrophysics


“Priyamvada Natarajan is a professor of physics and astronomy at Yale, who has spent her life investigating dark matter, dark energy and black holes. In Mapping the Heavens, she stands back and presents a broad picture of our slow advance in measuring and then interpreting the complexity of the universe…  Considering humanity in relation to the universe, Natarajan explains that we have very little idea of where we are going. She asks us to adapt Galileo’s perspective – he was the first to prove that the Moon was mountainous, and to measure the mountain heights, but was certainly incapable of predicting that a mere 360 years later we would walk on its surface or return home with suitcases of lunar material.”—David W. Hughes, TLS
— David W. Hughes