Why I Am Not a Buddhist (Hardcover) 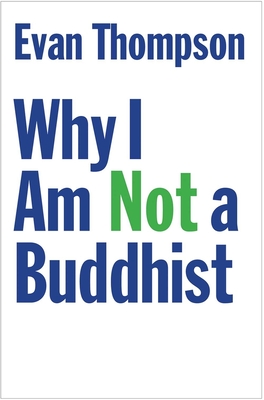 A provocative essay challenging the idea of Buddhist exceptionalism, from one of the world’s most widely respected philosophers and writers on Buddhism and science

Buddhism has become a uniquely favored religion in our modern age. A burgeoning number of books extol the scientifically proven benefits of meditation and mindfulness for everything ranging from business to romance. There are conferences, courses, and celebrities promoting the notion that Buddhism is spirituality for the rational, compatible with cutting‑edge science, indeed, “a science of the mind.” In this provocative book, Evan Thompson argues that this representation of Buddhism is false.

In lucid and entertaining prose, Thompson dives deep into both Western and Buddhist philosophy to explain how the goals of science and religion are fundamentally different. Efforts to seek their unification are wrongheaded and promote mistaken ideas of both. He suggests cosmopolitanism instead, a worldview with deep roots in both Eastern and Western traditions. Smart, sympathetic, and intellectually ambitious, this book is a must‑read for anyone interested in Buddhism’s place in our world today.

Evan Thompson is professor of philosophy at the University of British Columbia and a fellow of the Royal Society of Canada.

“Following in the tradition of Bertrand Russell's Why I Am Not a Christian, Thompson delivers a timely rebuttal to what he calls Buddhist modernism, the idea, loosely, that Buddhism is not a religion but a science of the mind. The argument Western Buddhists need to hear.”—Kirkus Reviews

“Presents a convincing case against Buddhist exceptionalism and scientific defenses of the tradition . . . The clarity of Thompson’s arguments, including his explanations of models of consciousness, and his genuine regard for Buddhism (despite his skepticism toward claims of superiority) avoid the pitfalls of many similar critiques.”—Publishers Weekly

“A truly compelling critique of Buddhist exceptionalism and of modern Buddhism as a whole.”—Sam Littlefair, Lion’s Roar

"Why I Am Not a Buddhist is an excellent work of philosophy. Thompson demonstrates a formidable understanding of the topic and his honest critique shows great intellectual courage. Anyone interested in Buddhism would do well to engage with this timely and compelling book."—Hane Htut Maung, Philosophy East and West Journal

"A provocative, insightful, and challenging critique of what he calls 'Buddhist modernism.'. . . [A] philosophical and cosmopolitan conversation that Thompson exemplifes so eloquently."—A. Minh Nguyen, Asian and Asian American Philosophers and Philosophies

"A devastating and comprehensive critique."—Jonardon Ganeri, Asian and Asian American Philosophers and Philosophies

"Evan Thompson has given us another lovely book. . . . It is a penetrating look at the Buddhist modernist movement as we see it today, and a penetrating critique of some of the most problematic aspects of that movement. It is sympathetic, generous, and honest. It is full of insight, and a great read."—Jay L. Garfield, Asian and Asian American Philosophers and Philosophies

“Thompson's erudite and eminently engaging essay should be required reading of all those interested in Buddhist modernism.”—Robert Sharf, University of California, Berkeley

“Philosophy should be a project reaching beyond age-old geographical divides, a project anchored on critical reason to promote human transformation. With inspiring intellectual courage, Thompson shows us the way forward.”—Marcelo Gleiser, Dartmouth College

"In this beautifully written philosophical memoir, Evan Thompson takes us through his incredible intellectual journey that begins in boyhood at the utopia of Lindisfarne and brings him to the deepest precincts of both Buddhist philosophy and cognitive science. A deeply thoughtful book."—Owen Flanagan, author of The Geography of Morals

“This is a wise and thoughtful book. Buddhism, from this perspective, turns out to be many things, but not a science of the mind.”—T.M. Luhrmann, author of When God Talks Back