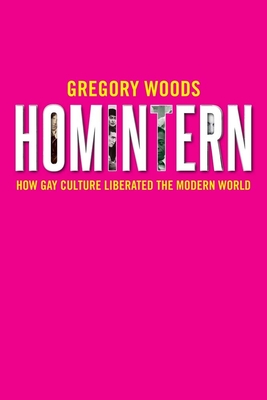 In a hugely ambitious study which crosses continents, languages, and almost a century, Gregory Woods identifies the ways in which homosexuality has helped shape Western culture. Extending from the trials of Oscar Wilde to the gay liberation era, this book examines a period in which increased visibility made acceptance of homosexuality one of the measures of modernity.

Woods shines a revealing light on the diverse, informal networks of gay people in the arts and other creative fields. Uneasily called “the Homintern” (an echo of Lenin’s “Comintern”) by those suspicious of an international homosexual conspiracy, such networks connected gay writers, actors, artists, musicians, dancers, filmmakers, politicians, and spies. While providing some defense against dominant heterosexual exclusion, the grouping brought solidarity, celebrated talent, and, in doing so, invigorated the majority culture.

Woods introduces an enormous cast of gifted and extraordinary characters, most of them operating with surprising openness; but also explores such issues as artistic influence, the coping strategies of minorities, the hypocrisies of conservatism, and the effects of positive and negative discrimination. Traveling from Harlem in the 1910s to 1920s Paris, 1930s Berlin, 1950s New York and beyond, this sharply observed, warm-spirited book presents a surpassing portrait of twentieth-century gay culture and the men and women who both redefined themselves and changed history.

Gregory Woods was appointed to Britain’s first chair in Gay and Lesbian Studies by Nottingham Trent University in 1998. He lives in Nottingham, UK.

“Wood’s is a knowledgeable and entertaining guide.”—Caleb Crain, the Guardian
"Woods regales the reader with an avalanche of stories, ribald gossip, and lengthy asides that collectively confirm the book’s central thesis: gay culture, or at least gays and lesbians, did indeed liberate the modern world."—Brian Kenney, Booklist
"A well-researched, compelling study of how countless gay men have affected, influenced, and restructured the cultural climate for more than 100 years. . . . An information-heavy book that provides a wonderful resource for those interested in learning about the rise of gay poetics at the onset of the 20th century."—Kirkus Reviews, Starred Review
"Delicious, satisfying reading. Even readers knowledgeable about post-Oscar Wilde gay culture are unlikely to read more than a paragraph or two without learning something they did not know, and I cheerfully confess that my most frequent margin note was '!!!' . . . The range and depth of Woods' scholarship are remarkable, but the power of Homintern owes as much to the unabated vitality of his writing."—Tim Pfaff, Bay Area Reporter
Finalist for the Lambda Literary Awards in the LGBTQ Studies category.
"Without letting the purveyors of clichés about cliquish homosexuals off the hook, this lively history turns those stereotypes on their heads, taking seriously the queer networks that were central to modernism. Richly literary and attentive to networks of both men and women, Homintern also has a wide geographical range. Russian, Scandinavian and South American texts are thoughtfully integrated with accounts of New York, London, Berlin, Paris and their Mediterranean outposts. Gregory Woods writes with an insider’s flair, but does not sugarcoat the histories he tells. Frank about self-destructive behavior, he is also sensitive to divisions among sexual minorities along lines of ideology, class and generation."—Christopher Reed, author of Art and Homosexuality: A History of Ideas
"Woods is a born storyteller, and he tells the story of the interlocking, international gay and lesbian networks in an unflaggingly lively way. This is a book that needs to be published."—David Bergman, author of The Violet Hour and Gay American Autobiography: Writings from Whitman to Sedaris
"Gregory Woods’ Homintern is not just a first-rate work of literary and historical scholarship but a deeply moving narrative in its own right. In its global reach, it has no precedent, yet Woods never sacrifices intimacy for grandeur. In the future I have no doubt that scholars and readers will look to this as an essential text, one of those rare books that make other books possible."—David Leavitt, author of The Man Who Knew Too Much: Alan Turing and the Invention of the Computer