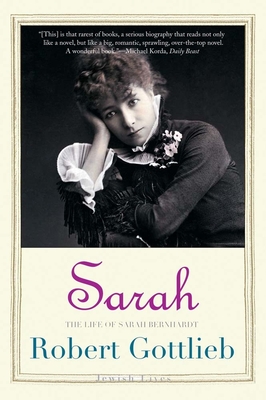 Everything about Sarah Bernhardt is fascinating, from her obscure birth to her glorious career—redefining the very nature of her art—to her amazing (and highly public) romantic life to her indomitable spirit. Well into her seventies, after the amputation of her leg, she was performing under bombardment for soldiers during World War I, as well as crisscrossing America on her ninth American tour.

Her family was also a source of curiosity: the mother she adored and who scorned her; her two half-sisters, who died young after lives of dissipation; and most of all, her son, Maurice, whom she worshiped and raised as an aristocrat, in the style appropriate to his presumed father, the Belgian Prince de Ligne. Only once did they quarrel—over the Dreyfus Affair. Maurice was a right-wing snob; Sarah, always proud of her Jewish heritage, was a passionate Dreyfusard and Zolaist.

Though the Bernhardt literature is vast, Gottlieb’s Sarah is the first English-language biography to appear in decades. Brilliantly, it tracks the trajectory through which an illegitimate—and scandalous—daughter of a courtesan transformed herself into the most famous actress who ever lived, and into a national icon, a symbol of France.

Robert Gottlieb is the author of Lives and Letters, George Balanchine, and Great Expectations: The Sons and Daughters of Charles Dickens. His career in publishing—as editor-in-chief of Simon and Schuster, Alfred A. Knopf, and The New Yorker—is legendary.

"[This] is that rarest of books, a serious biography that reads not only like a novel, but like a big, romantic, sprawling, over-the-top novel. . . . A wonderful book."—Michael Korda, Daily Beast

"A fascinating look at Bernhardt's mythology and the stagecraft behind it. . . . What Sarah understood--as Gottlieb, a storied editor and publisher, makes clear--was how the heightened drama of performance might be extended to her own life."--Vogue

"Mr. Gottlieb's fluid style and lightly worn authority offer a lucid and essential modern guide to the making of celebrity, in an era before the noun existed."--Norman Lebrecht, Wall Street Journal

"Robert Gottlieb is true to the mystery of his subject's self-invented life. He also does what few biographers of famous women seem able or willing to do: He focuses on her work. . . . Vintage Gottleib, full of humor and refreshingly free of hagiography."--Susan Salter Reynolds, Los Angeles Times

"Gottlieb's Sarah is a fine introduction to a fascinating woman, giving the reader a lively sense of why, so many decades after her death, the name of Sarah Bernhardt, above all others, still stands for actress."--Julius Novick, The Forward

"Avoiding pedantry on the one hand and prurience on the other, [Gottlieb] writes about Bernhardt with convincing respect and sympathy, tempered with quiet amusement at her oddities and excesses. . . . His conversational, urbane prose is accompanied by numerous illustrations, including a splendid gallery of full-page photos showing Bernhardt in 16 of her famous roles. Gottlieb's Sarah is a fine introduction to a fascinating woman, giving the reader a lively sense of why, so many decades after her death, the name of Sarah Bernhardt, above all others, still stands for actress."--Julius Novick, The Forward
— Julius Novick

"There's an amazing amount of information here, about an amazing woman. . . . This is the first English-language biography of Sarah Bernhardt, and it is wonderfully informative as well as entertaining. I'm glad I've been given the opportunity to experience it, and will never again think of her as just that woman who was famous for playing Hamlet."--Shakespeare Geek

"An elegant and engaging portrait worthy of Bernhardt. . . a terrific book."--Glenn C. Altschuler, NPR Books We Like

"Comprehensive and illuminating about many things besides Bernhardt--French anti-Semitism, sexual mores amongst the intellectual aristocracy, etc.--without being exhausting. I can't imagine Bernhardt's story being told better."--Scott Eyman, Palm Beach Post

"Sarah Bernhardt is a gift to the raconteur. Mr. Gottlieb takes full advantage. Where he can, he stages her life as a performance, with knowing asides and a certain kind of old-fashioned fun." — Economist

"A fascinating look at Bernhardt's mythology and the stagecraft behind it. . . . What Sarah understood--as Gottlieb, a storied editor and publisher makes clear--was how the heightened drama of performance might be extended to her own life."--Vogue

"Robert Gottlieb's book is appropriately small, beautiful and packed with drama. . . . Mr. Gottlieb is a meticulous reader, researcher and distiller of information. . . . Although he claims we can know little about her actual performances, he manages to make them come alive. I see her and hear her, declamatory to our modern sensibilities, alarmingly natural and passionate to audiences of the late 19th century."--Kathleen George, Pittsburgh Post-Gazette

"One ends this breathlessly readable and deeply intelligent book in as much awe of Sarah as people and audiences were in her own lifetime; it is that rarest of books, a serious biography that reads not only like a novel, but like a big, romantic, sprawling, over-the-top novel. Gottlieb has made of her story a wonderful book--one, which, to pay it its highest due, any editor, including himself (and me), would give his or her eye-teeth to have published!"--Michael Korda, Daily Beast

'A book that is wise, funny, affectionate and enjoyable as well as blessedly compact.' — John Carey, Sunday Times
— John Carey

"In his timely new biography, Sarah: The Life of Sarah Bernhardt, Robert Gottlieb traces the meteoric, improbable, epic life of the illegitimate daughter of a high-flying Paris courtesan who became the most famous actress in theater history."--Joseph A. Harris, American Spectator
— Joseph A. Harris

"In 'Sarah: The Life of Sarah Berndhardt', Robert Gottlieb presents (his subject) appreciatively, in full color, in all her exuberance, extravagance, beauty, passion and talent. This is the first English-language biography in decades of the first internationally known stage star."--Sandee Brawarsky, New York Jewish Week
— Sandee Brawarsky

"At only 220 pages, Sarah is necessarily a breathless account of a life that would happily occupy a book three times longer; yet it makes for an absorbing, at times fantastical read, and is leavened throughout by a dry wit and affectionate scepticism."—Michael Simkins, Mail on Sunday
— Michael Simkins

"A fabulous story and Gottlieb has produced a brilliant short biography, telling you everything you want to know in 200 pages. He’s especially good at analysing what Sarah’s magic was but there was so much of it you’ll have to read the book to find out."—Duncan Fallowell, Daily Express
— Duncan Fallowell

"Robert Gottlieb is a firmly even-handed biographer and his engagingly zippy account focuses particularly on exposing the cracks in the contradictory stories that Bernhardt and her hagiographers assembled about her life…This is a sterling biography, equal to its subject."—Olivia Laing, The Observer
— Olivia Laing

"Although Bernhardt's fame is universal and the literature about her immense, the major postwar English language biographies have long been out of print...Gottlieb's succinct survey is timely"—Rupert Christiansen, Literary Review
— Rupert Christiansen

"Short, witty and tender…This book is one that your friends and family will actually want to read: a better stocking-topper for the literary-minded is hard to imagine."—Miranda Seymour, The Lady
— Miranda Seymour

"Gottlieb does an excellent job describing Bernhardt, making her come alive for the reader or, perhaps more accurately, making her larger-than-life personality seem real. With its general overview of her life, the book serves as a perfect introduction to her personal life and her career."—Rabbi Rachel Esserman, Voice of the Dutchess Jewish Community
— Rabbi Rachel Esserman

"Gottlieb writes about Bernhardt with convincing respect and sympathy, tempered with quiet amusement at her oddities and excesses. His lucid, conversational, urbane prose is accompanied by numerous illustrations. . . . Gottlieb's Sarah is a fine introduction to a fascinating woman."—Julius Novick, Forward
— Julius Novick

"Robert Gottlieb presents her appreciatively, in full color, in all her exuberance, extravagance, beauty, passion and talent."—Sandee Brawarsky,
— Sandee Brawarsky

"Gottlieb's Life casts a  reassuringly sceptical eye over a plethora of less-than-reliable writings about Berhardt, some of them the actress's own memoirs."—John Nathan, Jewish Chronicle
— John Nathan

“With panache worthy of his subject, Gottlieb lays out the players as if Bernhardt’s life were a stage drama. His charismatic prose captures the spell of the consummate mythmaker.”—Carol Ockman, coauthor of Sarah Bernhardt: The Art of High Drama
— Carol Ockman

“Robert Gottlieb sifts through the fiction in this hugely entertaining biography of the theatrical legend, and often casts doubt on the competing accounts of her life with little more than a raised eyebrow.”—Victoria Segal, The Guardian
— Victoria Segal