Carl Van Vechten and the Harlem Renaissance: A Portrait in Black and White (Paperback) 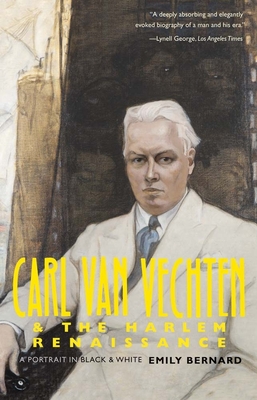 A groundbreaking inquiry into the life of the audacious Carl Van Vechten, and his singular and singularly controversial contributions to the Harlem Renaissance

This book is a partial biography of a once controversial figure. It is not a comprehensive history of an entire life, but rather a chronicle of one of his lives, his black life, which began in his boyhood and thrived until his death. The narrative at the core of Carl Van Vechten and the Harlem Renaissance is not an attempt to answer the question of whether Van Vechten was good or bad for black people, or whether or not he hurt or helped black creative expression during the Harlem Renaissance. As Bernard writes, the book instead “enlarges that question into something much richer and more nuanced: a tale about the messy realities of race, and the complicated tangle of black and white.”

Emily Bernard is an associate professor in the English Department and ALANA U.S. Ethnic Studies Program at University of Vermont. Her books include Remember Me to Harlem: The Letters of Langston Hughes and Carl Van Vechten, a New York Times Notable Book of the Year. She lives in Burlington, VT.

"A deeply absorbing and elegantly evoked biography of a man and his era."—Lynell George, Los Angeles Times
— Lynell George

"[Van Vechten] was undoubtedly one of the midwives of the Harlem Renaissance, which raised the vexing question of the effects of white patronage on that proud but short-lived cultural movement. Emily Bernard's penetrating book confronts this issue from every conceivable angle while writing the largely forgotten Van Vechten back into the story. Bernard's book [is] obviously a labor of love."—Morris Dickstein, Times Literary Supplement
— Morris Dickstein

"[A] landmark study of Carl Van Vechten . . . . A rich and dramatic story that explores the 'complicated tangle of black and white,' as well as the proclivities of a provocative and inarguably significant player in one of America's most creative movements."—Publishers Weekly
— Publishers Weekly

"Deeply informed, shrewd, and convincing, Emily Bernard’s portrait of Carl Van Vechten illuminates his colorful life as well as some of the more shadowy but essential issues involving art, society, and race relations in America."—Arnold Rampersad, author of The Life of Langston Hughes

“In this absorbing and evocative book, Emily Bernard has restored Carl Van Vechten to his rightful place in the thick of the Harlem Renaissance. And in so doing she has created a wonderful mosaic of relationships that brings the period before us in all its rich complexity and allows us to see both blackness and whiteness with new eyes.”—Rachel Cohen, author of A Chance Meeting
— Rachel Cohen

"Carl Van Vechten—a troubling, essential figure in the history of American modernism, not to mention the history of race—has found his best critic and champion in Emily Bernard, who takes the issues the writer and photographer raised in his work and examines them through the lens of a distinctly twenty-first century perspicacity."—Hilton Als, author of The Women
— Hilton Als

"[A] complex biographical treatment of a significant figure in the explosion of black arts that was centered in Harlem. . . in the 1920s and 1930s. . . Gives important contextual meaning to what exactly the Harlem Renaissance meant to black participants and what white promotion of black artists signified."—Brad Hooper, Booklist
— Brad Hooper

“Emily Bernard moves to the front of the line of scholars who have re-cast the Harlem Renaissance and opened up questions about the complexity of cross-racial desire and obsession as it plays out on the cultural front. An intrepid scholar, Bernard dives right into the waters of racial misunderstanding, political incorrectness, and the unfettered love that drove Van Vechten's career. This is a passionate, dead-serious exploration of and meditation on nothing less than negrophilia and its cultural yield. This book is a gem, and it will be influential for many years to come.”—Elizabeth Alexander, author of The Black Interior

"[A] complex biographical treatment of a significant figure in the explosion of black arts that was centered in Harlem. . . . Gives important contextual meaning to what exactly the Harlem Renaissance meant to black participants and what white promotion of black artists signified."—Brad Hooper, Booklist
— Brad Hooper

"Bernard. . . who has devoted years to the study of the Harlem  Renaissance, delivers a semester’s worth of knowledge in a smooth, edifying narrative. . . Van Vechten became a conduit for works of the men and women he met in Harlem, at his well-attended parties and through his work as a dance, theater and music critic. . . . Bernard ably brings him to life."—Kirkus Reviews
— Kirkus

"Carl Van Vechten and the Harlem Renaissance, as much the biography of a book as of the man who wrote it, is an admirably sober excursion into a field in which intoxicated opinion is rife."—James Campbell, Wall Street Journal
— James Campbell

Read Emily Bernard's essay on her own relationship with Carl Van Vechten on the Yale Press Log.
— http://blog.yupnet.org/2012/02/24/eminent-biography-emily-bernard-on-carl-van-vechten/

"Bernard's portrait of the writer's Harlem Renaissance relationships provides a more nuanced picture of him and the intense debates he occasioned as part of his role as a patron and artist in the 1920s. Bernard brings to life the conflicts of Van Vechten's collaborations and creations, and also the passionate debates about art and life that consumed him and his literary counterparts."—D.E. Magill, Choice
— D.E. Magill

"A thoughtful reconsideration of Van Vechten's career as both a writer and an effective champion of Negro writers."—Kalefa Sanneh, New Yorker
— Kalefa Sanneh

"Written by a scholar who has spent years studying Van Vechten's life and writings, this book provides a different outlook on Van Vechten's work and his importance to the understanding of Harlem and its artistic creations."—D.E. Magill, CHOICE
— D.E. Magill