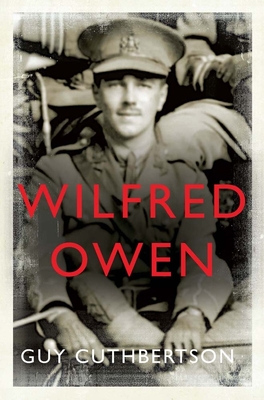 By Guy Cuthbertson
Out of Print

One of Britain’s best-known and most loved poets, Wilfred Owen (1893–1918) was killed at age 25 on one of the last days of the First World War, having acted heroically as soldier and officer despite his famous misgivings about the war's rationale and conduct. He left behind a body of poetry that sensitively captured the pity, rage, valor, and futility of the conflict.

In this new biography Guy Cuthbertson provides a fresh account of Owen's life and formative influences: the lower-middle-class childhood that he tried to escape; the places he lived in, from Birkenhead to Bordeaux; his class anxieties and his religious doubts; his sexuality and friendships; his close relationship with his mother and his childlike personality.  Cuthbertson chronicles a great poet's growth to poetic maturity, illuminates the social strata of the extraordinary Edwardian era, and adds rich context to how Owen's enduring verse can be understood.

Guy Cuthbertson is senior lecturer in English literature at Liverpool Hope University and an expert on the First World War poets.

“[A] vigorous, well-documented narrative, with fresh light to cast on some central themes. It is excellent on the Shropshire background, on Owen’s educational career…and on the curious life he led as an émigré in France. It offers too some intelligent analysis of Owen’s growing technical accomplishment as a poet.”—Rowan Williams, New Statesman
— Rowan Williams

“Cuthbertson’s biography is admirably thorough in its unpacking of Owens’s poetic imagery. There is no reference that is unexplored.”—Daisy Goodwin, The Sunday Times
— Daisy Goodwin

“[Cuthbertson] writes with such sincerity, telling the story of Owen’s short life and journey from provincial obscurity to the carnage on the western front and then to posthumous fame as a ‘war’ poet with diligence and empathy.”—Jason Cowley, The Financial Times
— Jason Cowley

“Invaluable insight into a man whose words will be heard often during the upcoming WWI centennial.”—Booklist (starred review)
— Booklist

“Cuthbertson is scrupulous, thoughtful and open-minded. His book is fired with enthusiasm for the poems and respect for the man who created them. The result is a fine biography.”—John Sutherland, The Times
— John Sutherland

‘Guy Cuthbertson’s book is an amiable and admiring account of Wilfred Owens’s slow and often painful discovery of himself, as he made his way from railwayman’s son to Army officer and – after his death in battle – to famous poet.’—Derwent May, Standpoint Magazine
— Derwent May

‘[Cuthbertson] score[s] highly as a sensitive and admiring critic of the poetry. . .attuned to the ironies and contradictions of his subject, whom he (surely correctly) portrays as an eternal child and swirling mass of contradictions.’—Nigel Jones, The Sunday Telegraph
— Nigel Jones

‘For a long time Owen has been set in stone, his poetry ossifying into anti-war cliché. Cuthbertson has made him live again.’—Gary Day, THES
— Gary Day