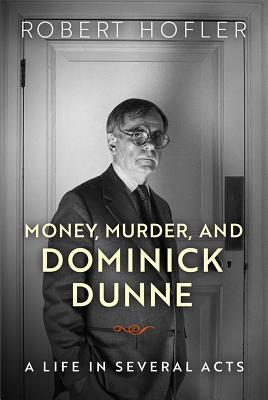 Dominick Dunne seemed to live his entire adult life in the public eye, but in this biography Robert Hofler reveals a conflicted, enigmatic man who reinvented himself again and again. As a television and film producer in the 1950s–1970s, hobnobbing with Humphrey Bogart and Natalie Wood, he found success and crushing failure in a pitiless Hollywood. As a Vanity Fair journalist covering the lives of the rich and powerful, he mesmerized readers with his detailed coverage of spectacular murder cases—O.J. Simpson, the Menendez brothers, Michael Skakel, Phil Spector, and Claus von Bülow. He had his own television show, Dominick Dunne's Power, Privilege, and Justic. His five best-selling novels, including The Two Mrs. Grenvilles, People Like Us, and An Inconvenient Woman, were inspired by real lives and scandals. The brother of John Gregory Dunne and brother-in-law of Joan Didion, he was a friend and confidante of many literary luminaries. Dunne also had the ear of some of the world's most famous women, among them Princess Diana, Nancy Reagan, Liz Smith, Barbara Walters, and Elizabeth Taylor.

Dunne admitted to inventing himself, and it was that public persona he wrote about in his own memoir, The Way We Lived Then. Left out of that account, but brought to light here, were his intense rivalry with his brother John Gregory, the gay affairs and relationships he had throughout his marriage and beyond, and his fights with editors at Vanity Fair. Robert Hofler also reveals the painful rift in the family after the murder of Dominick's daughter, Dominique—compounded by his coverage of her killer's trial, which launched his career as a reporter.

Robert Hofler has been an entertainment editor for decades at several publications, including Life, Us, and Variety. He is the author of The Man Who Invented Rock Hudson and Party Animals, as well as Sexplosion: How a Generation of Pop Rebels Broke All the Taboos. The lead theater critic for TheWrap, Hofler lives in New York City.

"Dominick Dunne had a front-row seat at the birth of our current celebrity culture. He chronicled its rise with an unsparing eye to detail and an emotional intensity that often said as much about him as it did those he wrote about. Robert Hofler has captured the wit, charm, pomposity, strength, and vulnerability that made Dunne such a complex and fascinating man." —William J. Mann, author of Kate: The Woman Who Was Hepburn

"Sweeping in scope and intimate in tone, this biography of Dominick Dunne is truly a life and times story, filled to bursting with notorious crimes and glam parties, high-society doyens and spats, Hollywood celebrities minor and major, and, beneath it all, the tragedies and mysteries that made this singular man tick." —Patrick McGilligan, author of Young Orson

"The life of Dominick Dunne as recounted by Robert Hofler is as entertaining as it is tragic. Hofler digs in to reveal each telling detail and scandalous anecdote, which no one would appreciate more than Dunne himself. It's a knowing read about fame, the upper class, sexuality, and the struggle for immortality." —Sharon Waxman, author of Rebels on the Backlot

"With clear-eyed precision, Hofler cuts through Dunne's love of hyperbole and drama to reveal the man: his sometimes charming, sometimes chilling mix of humanity and harmfulness. A probing, fascinating dissection of ambition and American privilege." —Trac

“A skillfully crafted story of a vivid character who was a master of self-destruction and reinvention.”—Peter Bart, author of Fade Out

“Hofler proves to be an apt and entertaining chronicler of Dunne's eventful, turbulent, and often sorrowful life. . . . A spirited biography of a complicated, combative, self-aggrandizing, and tormented man.“—Kirkus Reviews