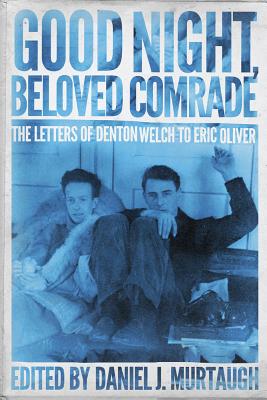 Denton Welch (1915–48) died at the age of thirty-three after a brief but brilliant career as a writer and painter. The revealing, poignant, impressionistic voice that buoys his novels was much praised by critics and literati in England and has since inspired creative artists from William S. Burroughs to John Waters. His achievements were all the more remarkable because he suffered from debilitating spinal and pelvic injuries incurred in a bicycle accident at age eighteen.

Though German bombs were ravaging Britain, Welch wrote in his published work about the idyllic landscapes and local people he observed in Kent. There, in 1943, he met and fell in love with Eric Oliver, a handsome, intelligent, but rather insecure "landboy"—an agricultural worker with the wartime Land Army. Oliver would become a companion, comrade, lover, and caretaker during the last six years of Welch's life. All fifty-one letters that Welch wrote to Oliver are collected and annotated here for the first time. They offer a historical record of life amidst the hardship, deprivation, and fear of World War II, and also are a timeless testament of one young man's tender and intimate emotions, his immense courage in adversity, and his continual struggle for love and creative existence.

Denton Welch is the author of four novels published between 1943 and 1950: Maiden Voyage, In Youth Is Pleasure, Brave and Cruel, and A Voice through a Cloud, as well as a large body of short fiction and poetry. Daniel J. Murtaugh teaches literature and history at Park University and at Johnson County Community College. He lives in Kansas City, Missouri.

"Readers are in for a treat: Good Night, Beloved Comrade is a masterpiece. The account of a thrilling and tormenting gay love affair, it is also a devastating experience of disability and, above all, the awakening of a remarkable and unforgettable literary voice." —Richard Canning, author of Gay Fiction Speaks

"Whenever a student tells me he has nothing to write about I refer him to Denton Welch. It is time that Denton received the attention he deserves." —William S. Burroughs,