An Underground Life: Memoirs of a Gay Jew in Nazi Berlin (Hardcover) 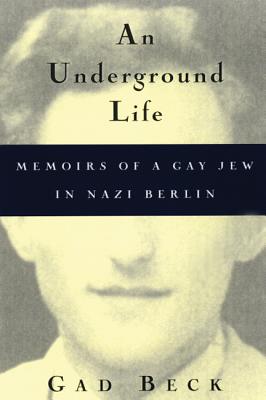 That a Jew living in Nazi Berlin survived the Holocaust at all is surprising. That he was a homosexual and a teenage leader in the resistance and yet survived is amazing. But that he endured the ongoing horror with an open heart, with love and without vitriol, and has written about it so beautifully is truly miraculous. This is Gad Beck’s story.

Gad Beck was the director of the Jewish Adult Education Center in Berlin, Germany, until his retirement. He is still very active as a public speaker on life in Berlin during the Nazi period.

"There may be other books by other Jewish Berliners, but surely none as riveting as this one." —Frontiers

"Born to an interfaith couple, Beck . . . discusses the near-simultaneous embrace of both his Jewish and his gay identities in the most unlikely of settings: a Nazi Germany that was intent on eliminating both groups." —Publishers Weekly

"An extraordinary tale. . . . Beck’s stories of secret meetings, backstabbing betrayals and Nazi interrogations are the stuff of spy novels—only here they are real, with a hauntingly young protagonist." —Wayne Hoffman, Washington Post

"The person you meet in the pages of An Underground Life is far from pitiable. [Gad Beck] is instead a proud, insouciant man. . . . His involvement in the traumatic events of his time is so intense and authentic that his narrative pulls you along."—Christopher Lehmann–Haupt, New York Times

"Despite the grim backdrop, Beck’s reminiscences are sensual, passionate, and strangely joyful." —Out Magazine

"An inspiring tale that should serve as a reminder that straight people don’t have a monopoly on courage." —Deborah Peifer, Bay Area Reporter